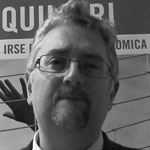 Arrigo Pallotti is Associate Professor at the Department of Political and Social Sciences, University of Bologna. His research focuses on democratization in sub-Saharan Africa, decolonization of Southern Africa, and relations between Africa and the European Union. He was co-responsible for the Bologna unit of the project Community Based System in HIV Treatment (COBASYS), 2009-13, involving five European and seven African universities and funded by the ACP Science and Technology Programme.

Pallotti teaches ‘History and institutions of Africa’ and ‘International relations of Africa’. Among his publications are Le parole dello sviluppo. Metodi e politiche della cooperazione internazionale [The Words of Development: Methods and Policies of International Cooperation] (with M. Zamponi) (Carrocci, 2014).