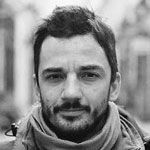 Giorgio Grappi is Research Fellow at the Department of Political and Social Sciences, University of Bologna. His research currently focuses on corridors, logistics and the transformation of the state form. His main research areas include the transition to postcolonial state and postcolonial capitalism and the political dimension of migrations. He has participated in the Sixth Annual Winter Course on Forced Migration organized by Calcutta Research Group (India) and he has been part of two EU-funded projects: GeMIC (Gender, migration and intercultural interactions) and MIG@NET (Transnational digital networks, migration and gender).

More recently he has been part of the collective writing of ‘New Keywords: Migration and Borders’ in Cultural Studies (2014) and he is taking part in the research project Logistical Worlds: Infrastructure, Software, Labour. His latest publications include ‘India’s Corridors of Development and New Frontier of Capital’ (with I. Dey) in South Atlantic Quarterly (2015) and the book Logistica (Ediesse, 2016).