Main navigation
Sub navigation
News > 2020 > Towards inclusivity in the EU's approach to women, peace and security

Towards inclusivity in the EU's approach to women, peace and security

The EU’s approach to women in conflict resolution and peacebuilding has changed significantly over the last two decades. The process of adopting a new approach to women, peace and security in 2018 represents a shift towards greater focus on diversity and inclusiveness, argues GLOBUS researcher Heidi Riley. 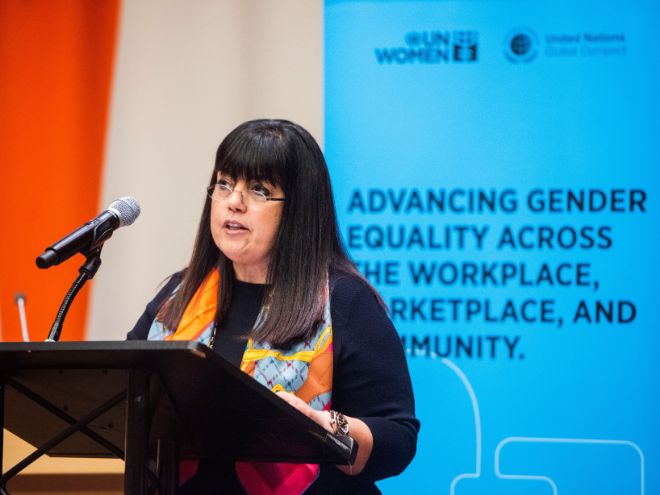 Mara Marinaki is the EU's Principal Advisor on Gender and on the Implementation of UNSCR 1325 on Women, Peace and Security (Photo: UN Women)

Her main research area is in gender and armed conflict.

Gender equality is one of the core values of the European Union and has over the last two decades become increasingly important in the EU’s external action agenda. In 2000, the United Nation’s Security Council for the first time recognized the need for greater participation of women in peacemaking and conflict resolution efforts in Security Council Resolution 1325. Since then, the EU has taken several steps to implement the Women, Peace and Security (WPS) Agenda.

Civilian populations are frequently targeted in many of today´s armed conflicts. Moreover, woman and girls are often affected the worst by conflicts and subject to grave injustices. Gender diversity in peace and reconciliation work is essential to provide conflict specific knowledge that can help prevent and resolve conflicts and empower women to this end.

In 2008, the EU became the first regional body to formally recognize UNSC resolution 1325 through its Comprehensive Approach on Women, Peace and Security.

Meanwhile, the EU’s approach to the WPS agenda has been heavily criticized by civil society and scholars, explains Heidi Riley, who is an Assistant Professor in International Relations at University College Dublin. In a new GLOBUS research paper, Riley argues that the process of adopting a new approach to women, peace and security that took place in 2017-18 represents a shift – from a state centered and uniform approach towards a greater focus on diversity and inclusiveness.

scholarship is that the EU did not sufficiently include civil society and actors with context specific knowledge from third countries in the planning and implementation of its strategy. This lack of conflict specific knowledge has in turn led to a number of other challenges.

‘Both the UN’s WPS agenda and the EU’s 2008 approach have been criticized for focusing too much on women as victims of conflict rather than recognizing women as active participants of change‘, says Riley.

Another issue about the EU’s 2008 approach is that it fails to take account of structural power and hierarchies that might be present on the ground in conflicts and that could perpetuate gender injustices. According to Riley, the EU did not include a so-called gendered analysis in its approach.

‘The EU did not ask how the policy would impact women, girls, men and boys differently’, says Riley and adds that ‘if the gendered structures are not taken as a precursor to the development of the policy, it could inadvertently create more problems in the conflict context’.

Similarly, the approach did not do enough to deal with the masculine orientation within some EU institutions. Although the 2008 approach called for more women to be recruited into security structures, the number of women in senior positions in EU external action remains low.

The plans and mechanisms for implementing the 2008 Approach were also to a large degree lacking, according to Riley.

Both the UN’s WPS agenda and the EU’s 2008 approach have been criticized for focusing too much on women as victims of conflict rather than recognizing women as active participants of change.

Riley argues that there was a lack of knowledge on how and where to implement the 2008 WSP approach, but also a lack of political will.

‘The fact that there was a lack of measures to implement the approach, gave an impression that the Union’s normative influence externally was limited and it became up to states themselves to implement the policy’, explains Riley.

A shift in the EU’s approach to gender justice

After a push for change from civil society and several member states, the EU saw the need to update the 2008 Approach in 2017. This resulted in the 2018 Strategic Approach to Women, Peace and Security.

According to Riley, both the process to achieve this agreement, as well as the final document itself, represent a shift in the EU’s approach to gender justice.

‘The 2018 Approach is more inclusive as it included knowledge from all sectors of society and also in conflict affected contexts, both when it comes to what is on paper and the consultation process that took place beforehand’, explains Riley.

According to Riley, the consultation process leading up to the new EU WPS approach included a number of civil society organization as well as member state representatives. Although these organizations were mostly European, Riley underlines that many of its representatives were gender experts, with particular knowledge about the realities of gender inequality, gender dynamics and women’s realities on the ground in third countries.

Engaging with women’s groups and grassroot organisations can provide the EU with important context specific knowledge that ultimately can ensure more effective operations.

As Riley explains, the inclusion of civil society is important for ensuring gender justice:

She also adds that this context specific knowledge can help the EU to conduct a proper gender analysis, an aspect that was largely missing from the previous approach. The gender analysis and mainstreaming gender were identified as overarching principles in the 2018 approach, and therefore identifies the need for the EU to take into account how its actions can affect different groups (formal and informal) in conflict-affected societies differently.

Through listening to a diversity of voices on the ground and conducting a proper gender analysis, the EU can ensure a culturally sensitive approach, explains Riley. One of the criticisms of UNSC resolution 1325 is that it is western orientated, and that it promotes a western liberal feminist position on gender equality. However, by taking a culturally sensitive position and listening to the voices on the ground, the EU can – to some extent – ensure more effective engagement.

But what if those voices on the ground clashes with the EU’s own core values on human rights?

Riley underlines that being culturally sensitive does not mean that the EU has to discard universal ideas of human rights.

‘The EU always has to weigh the different voices on the ground, but that doesn’t mean that it has to support them’, she says and adds ‘the EU can be culturally sensitive without diverging from universal human rights standards’.

According to Riley, it is too early to tell if the EU’s 2018 approach to women, peace and security will be implemented in an effective way. Riley underlines that the document is still in its early days, and whether this document represents a substantive shift in implementation is too early to tell. Meanwhile, she holds that the continuous engagement with civil society is a positive sign.

‘My understanding is that there is still positive engagement with civil society at the European level. Thus, I think there is a greater potential for civil society to hold the EU to account’.

E-mail this page
>
2020 > Towards inclusivity in the EU's approach to women, peace and security
Fb Twcontact@globus.uio.no