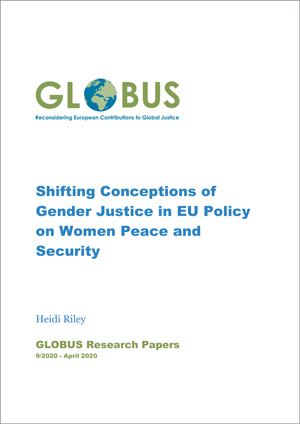 United Nations Security Council Resolution 1325 on Women, Peace and Security was a landmark resolution passed in 2000 that, for the first time, recognised the differing impact of conflict on women and girls and called for greater participation of women in conflict resolution and peacebuilding. This Resolution has now been followed by a further 8 Resolutions, which, together, make up the Women, Peace and Security Agenda. This paper examines United Nations Security Council Resolution 1325 on Women, Peace and Security through the lens of the three GLOBUS conceptions of justice: justice as non-domination, justice as impartiality and justice as mutual recognition. The paper argues that in the process and adoption of the 2018 EU Strategic approach to UNSCR 1325, the EU has demonstrated a shift towards an approach to gender justice that is more closely assigned to justice as mutual recognition than in its previous approach to Women, Peace and Security, found in the 2008 Comprehensive Approach to UNSCR 1325 and 1820. Using empirical data from meeting notes and qualitative interviews, this paper demonstrates how the EEAS engaged in a surprisingly inclusive process within the consultations that led to the adoption of the new 2018 Strategic Approach, which enjoyed extensive inclusion of a diversity of civil society voices in the process. As a result, the document shows a shift towards a greater focus on (1) diversity, (2) civil society inclusion and (3) a gendered analysis. From the perspective of gender justice, this shows a shift from an approach previously aligned with justice as impartiality in the text of the 2008 document, but in actuality, through a lack of implementation, an approach more akin to non-domination, towards an approach to gender justice that can be more firmly associated with justice as mutual recognition.