Workshop on gender justice and the EU's external policies

University College Dublin hosted a workshop on gender justice and the EU’s external policies on 29-30 November 2018, analysing the gender dimensions within all the issue areas covered in the GLOBUS project: climate change, trade and development, migration, and security and conflict. 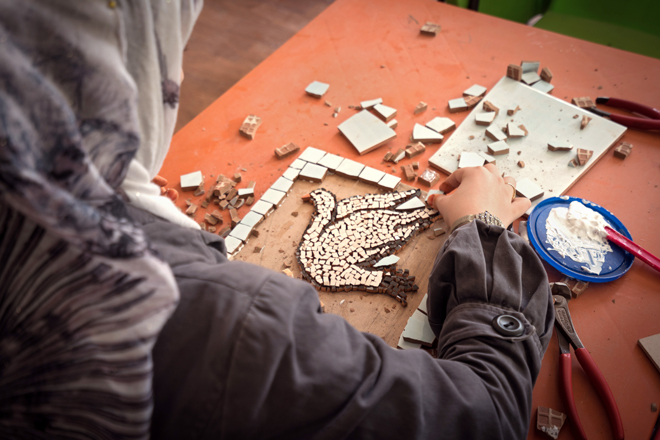 The workshop was chaired by Professor Ben Tonra (University College Dublin). It brought together more than 20 scholars and practitioners from Europe, the United States, India and South Africa. The goal of the workshop was to identify how gender influences the EU’s external relations and to assess the Union’s efforts to include a gender perspective in its foreign policy. By bringing together experts within the fields of gender and of the EU’s external policies, the workshop also served as an arena for exchange of knowledge across different policy fields and theoretical perspectives.

neighbourhood policy. Marcia Garcia (University of Bath) spoke about the role of gender in the EU’s approach to preferential trade agreements and trade rules, with a special focus on the EU’s Trade Agreement with Chile. Finally, Kholiswa Malindini and Odile Mackett (both University of Witwatersrand) explored the effects of trade liberalisation on female labour force participation and employment in Botswana and South Africa.

In the second panel on trade and development, Markus Thiel (Florida International University) started off by discussing the EU’s efforts to promote LGBTI rights internationally. He argued that the EU lacks the capacity to translate rights norms into policies. Johanne Døhlie Saltnes (ARENA Centre for European Studies) presented on the promotion of sexual minority rights and how to explain the donors’ foreign policy reactions to the 2014 Anti-Homosexuality Act in Uganda. Finally, Ibrahim Natil (Dublin City University) discussed the EU’s aid and women empowerment programmes in Palestine.

Helene Sjursen (ARENA Centre for European Studies) chaired a panel on global perspectives on gender equality. In this panel, Deep K. Datta-Ray (OP Jindal Global University) started by discussing gender across borders with a focus on the EU and India. Katarina Dalacoura (London School of Economics and Political Science) talked about gender in the Middle East and North Africa region after the Arab spring. Dalacoura presented findings from the H2020-funded project Middle East and North Africa Regional Architecture (MENARA).

A practitioner’s roundtable chaired by Helene Sjursen (ARENA Centre for European Studies) focused on experiences from the ground in foreign policy and diplomacy. Karin Aggestam (Lund Univeristy) shared findings from her research on feminist foreign policies, drawing specifically on the foreign policy of Sweden. Niall Burgess (Secretary General of the Irish Department of Foreign Affairs and Trade) spoke about gender equality in the diplomatic sphere and the Irish Foreign Service. Finally, Jennifer Cassidy (University of Oxford and former Irish diplomat) discussed the gender of diplomacy, arguing that we need to reconstruct the perceived image of what a successful diplomat is and should be.

The first day of the workshop ended with two panels on migration. The first panel was chaired by Sonia Lucarelli (University of Bologna), and started off with a discussion on how refugees are described in the political debate in Europe. Darius Ribbe (University of Cologne) argued that in this debate, refugees were often described as male and heterosexual, which has led to marginalisation of the non-male and non-heterosexual-male refugees in the European asylum system. Santosh Kumar Mishra (S. N. D. T. Women’s University) discussed the gaps in the protection of women during the refugee crisis in Europe. Gillian Wylie (University of Dublin – Trinity College) ended the panel by presenting her paper on human trafficking and the EU’s migration policies.

The second panel on migration was chaired by Graham Finlay (University College Dublin), and started with a presentation by Natalie Welfens (University of Amesterdam) on the EU’s gender norms during the migration crisis. Noemi Cascone (European Centre for Development Policy Management) followed with a discussion on the gender aspects in the EU Trust Fund for Africa. Vera Sofie Borgen Skjetne (ARENA Centre for European Studies) ended the panel by presenting a paper on the EU’s efforts to combat sex trafficking during the European migration crisis.

Gender in the EU's Common Security and Defence Policy

The second day of the workshop commenced with a panel on security and gender, chaired by Nikola Tomic (University College Dublin). Stephanie Anderson (University of Wyoming) talked about how the EU depicts itself in its Common Security and Defence Policy information campaigns, arguing that the EU portrays itself as the masculine hero in its missions in third countries. Roberta Guerrina (University of Surrey) continued the discussions asking whether the EU is a feminist power in its external affairs. Marjin Hoijtink (Free University Amsterdam) and Hanna Muehlenhoff (University of Amsterdam) discussed the calls for the EU to become a ‘hard’ and ‘masculine’ military power, and argued that the Union already is a military actor and that its security and defence policy has become increasingly gendered and militarised. Dawn Walsh (University College Dublin) ended the panel on security by sharing findings from her research on gender justice in EU mediation efforts. She argued that the inclusion of women in decision-making during peace mediations is an important element of securing gender just outcomes in post-conflict societies.

The workshop ended with a session on gender and climate change, chaired by Franziskus von Lucke (University of Tübingen). Louise Fitzgerald (University College Dublin) followed with a presentation on the justice implications of the EU’s turn to natural gas in its climate and energy policy. Fitzgerald argued that human rights effects and especially gender impacts have not been sufficiently considered in the EU’s energy transition. Gill Allwood (Nottingham Trent University) ended the workshop by discussing gender mainstreaming in the EU’s climate change policy and its relation to and coordination with the Union's migration and development policy.