Between advocacy and expertise: Civil society in EU foreign policy

In a globalised world the importance and relevance of civil society organisations is becoming ever more evident. How and on what terms does the EU include CSOs in foreign policy decision-making? 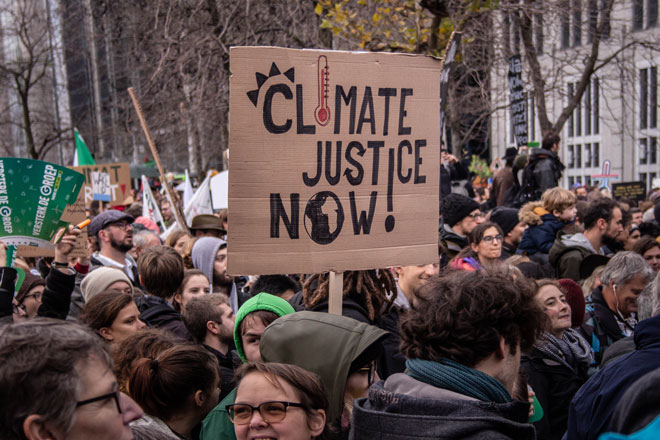 Protesters at the Brussels climate march in 2018 (Photo: Pelle De Brabander, CC BY 2.0)

Climate change or social and economic inequality are examples of global problems that require cooperation beyond state borders and across governments, international organisations and civil society. Given their particular expertise, Civil Society Organisations (CSOs) are important knowledge providers in this context. Because of their direct contact with citizens, as well as their often-transnational organisational structure, CSOs may provide new and different perspectives.

Many CSOs also provide humanitarian relief in situations of crisis and disaster, as well as contribute to building capacity and competence amongst citizens. In addition to the important collaboration between CSOs and government bodies, CSOs are also frequently citizens’ advocates and governments’ watchdogs. They may give voice to marginalised groups, contribute to hold decision-makers to account and promote transparency and accountability.  To maintain their ability to act as critical interlocutors and to raise awareness of issues that has fallen off the political agenda, autonomy is required.To what extent are EU-CSO relations organised in a manner that takes heed of the risk of co-optation?

The EU formally acknowledges the importance of engaging with civil society organisations: ‘An empowered civil society is a crucial component of any democratic system and is an asset in itself’, states a 2012 communication from the European Commission on Europe’s engagement with civil society in external relations.

Formal procedures for the inclusion of civil society

The EU’s institutions communicate with CSOs in a variety of ways. The formal procedures include open online consultations and CSO participation in Commission expert groups. The Commission may for example launch online consultations when it is preparing a new directive inviting stakeholders and private citizens to present their points of view.

Giulia Bondi, who is the Climate Justice and Energy Officer at CIDSE (Coopération Internationale pour le Dévelopement et la Solidarité) explains that when there is a consultation that is within the interest fields of CIDSE and where the organization has taken a position, they submit their views – always together with other CSOs and networks.

Representatives from civil society organisations may also serve as members of advisory or expert groups established by the Commission. Such expert groups are consultative bodies that consist of various stakeholders, such as civil society organisations or individuals serving in a personal capacity, or member states’ authorities or other public entities.

Interactions with civil society may only legitimise existing policies rather than lead to possible change.

Although these formally established arenas are important for ensuring interaction between the EU and civil society organisations, Wendel Trio, who is the Director of Climate Action Network (CAN) Europe, argues that this type of engagement can often be tick-the-box exercises from the EU’s side. In other words, the interactions with civil society may only legitimise existing policies rather than lead to possible change.

Bringing knowledge and expertise to the EU

Engaging in informal talks with the Commission and the European Parliament is often a more efficient way of bringing knowledge and expertise to the EU, argues Trio.

He explains that CAN Europe has informal meetings with several members of the Commission and the European Parliament, both at lower and higher levels.

'In the Commission, we have meetings at the expert level – the people who are really doing the drafting of the work and following up on the implementation of policies, but we also meet with the political level, so for example the Commissioner of climate and energy, or the Vice-President for the energy union and climate', says Trio.

Sally Nicholson, Head of Development Policy and Finance at the WWF’s Brussels Office, agrees that there are many opportunities to meet with both people in the Commission and in the European Parliament. There is generally an openness to talk to civil society, but she underlines that the EU has to listen to many stakeholders, to academia, the private sector and member states.

'The EU also has access to massive data, research and experts within its own agencies', Nicholson adds.

There is generally an openness to talk to civil society, but the EU has to listen to many stakeholders, to academia, the private sector and member states.

According to Wendel Trio, how and whether the EU considers CSOs’ views depends on which EU institution they are working with. He says that there is generally an openness in the Commission to consult with CSOs, but that there is little willingness to put the ideas into practice.

Trio adds that CAN Europe also works at the Member State level in order to make the political leaders of the state push the Commission in what they view as the right direction.

'The Commission will often avoid proposals that interfere too much with the work or positions of member states. Therefore, we work with these member states to push the agenda of the Commission', says Trio.

Janneke de Vries, who is Director of European partnerships at World Resources Institute, says that her organisation works more bilaterally with Member States, rather than directly with the EU. She argues that in some of the issues WRI works with, such as oceans and de-forestation, it is often the Member States, and not the EU itself who are the main drivers.

From input to practice

Although civil society might not always be listened to, there are cases where CSOs have successfully contributed to changing EU policies.

Giulia Bondi of CIDSE highlights the 1.5-degree temperature goal, which was included in the 2015 Paris Agreement. Bondi says that during the UNFCCC COP21 negotiations this target was pushed for by many small island states and developing countries most affected by climate change, but also backed by many NGOs.

The Commission will often avoid proposals that interfere too much with the work or positions of member states.

Wendel Trio from CAN Europe emphasises the revised Renewable Energy Directive, which was proposed by the Commission in 2016. In the proposal, the Commission set a target of 27 percent energy from renewable sources by 2030 in the EU. However, many NGOs and Member States wanted a higher target. Trio explains that CAN Europe and other NGOs worked with the Members of the European Parliament to increase the target after the Commission made its proposal, and succeeded. When the Council approved the agreement in 2018, it included a target of 32 per cent.

An integrated view of development

Sally Nicholson from WWF highlights the fact that CSOs and other actors successfully argued for an integrated view of the Sustainable Development Goals (SDGs) in the EU’s 2017 long-term strategy for development cooperation. This entails that the European development policy is addressed in a manner where the SDGs are not viewed in an isolated way, but rather as connected to each other, explains Nicholson.

Getting the EU to consider development issues in an integrated manner is a focal point for many CSOs. Giulia Bondi from CIDSE and Lorenzo Angelini from, Policy Officer at the European Peacebuilding Liaison Office (EPLO) also emphasise this point.

The EU must continue to work on implementing a more conflict-sensitive approach in its development efforts, as well as in all of its other types of engagements.

'Climate change is not only an environmental problem, but also a development and humanitarian problem, and therefore needs to be addressed in an integrated manner', says Bondi.

In his work for EPLO, Lorenzo Angelini focuses on promoting further integration of peacebuilding and conflict prevention into the EU’s development policy. He argues that the EU must continue to work on implementing a more conflict-sensitive approach in its development efforts, as well as in all of its other types of engagements.

Bringing the voices of the Global South to Brussels

Many CSOs also work to bring the voices of those affected by the EU’s policies to Brussels.

'We try to organise meetings between our network in the Global South and different representatives from EU institutions', says Bondi.

She explains that the CIDSE network works directly with many different communities impacted by climate change, by multinational corporations that are causing environmental damages and severely affecting indigenous communities, and with women and children living in rural areas in the Global South.

Similarly, EPLO organises meetings and conferences where people who are working on and affected by conflict can meet and exchange views with EU representatives. Lorenzo Angelini from EPLO highlights a one-day meeting in Uganda where local civil society actors met with EU officials and representatives from the European External Action Service to discuss peace and conflict issues so as to inform and adapt the EU’s engagement in the country.

Sally Nicholson highlights the importance of giving people access to decision-making processes and to information about issues that affect them.

The EU needs to put people before profits, by applying stronger and binding regulations to multinational corporations operating in the Global South.

'We want to ensure that people can have a say in how the environment around them is developed. It is not about telling people what to choose, but it’s about making sure that the processes are there so that people have access to information and have the opportunities to participate when decisions are made', says Nicholson.

Bondi adds that many CSOs  would also like the EU to enhance its focus on the human rights aspect of climate change and development.

'The EU needs to put people before profits, by applying stronger and binding regulations to multinational corporations operating in the Global South', Bondi says.

Nicholson takes a similar position, and says that

'The instruments that are set up by the EU sometimes seem to be a bit more focused on investment facilities to benefit European companies, rather than sustainable development'.