What role should NGOs play in the EU's foreign policy? The potential tension between co-optation and cooperation in NGO relations with the EU was one of the main themes discussed by Nathalie Tocci and Helene Sjursen on the second GLOBUS policy dialogue in Brussels 29 May. 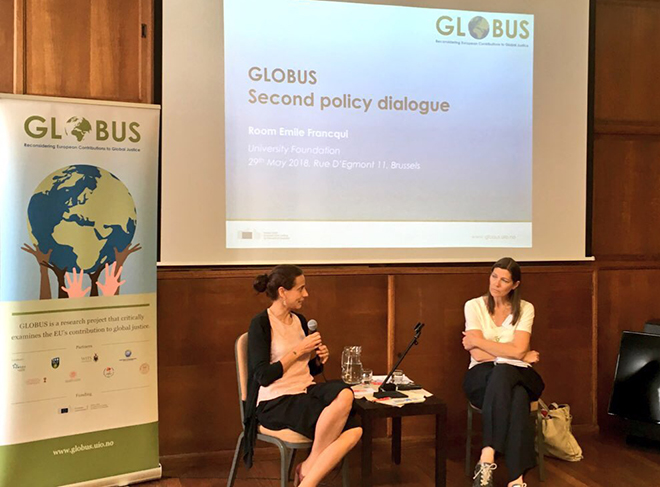 Nathalie Tocci is Director of the Istituto Affari Internazionali (IAI) and serves as special advisor to the EU’s High Representative for Foreign and Security Policy, Federica Mogherini.

Tocci was interviewed by Helene Sjursen about the role of civil society in EU foreign policy at GLOBUS’ second policy dialogue in Brussels on 29 May.

Critical voices are crucial for every democratic political process. In EU foreign policy making, civil society plays an important role by being a watchdog of the Union’s policies. Meanwhile, NGOs also partner with the EU in its policy-making. Thus, this may affect their role and ability to evaluate the EU policies. The fact that many civil society organisations receive EU funding might limit their room for criticism.

– Once you are a partner it might be difficult to act as a critical voice. Precisely because there is that partnership, you are conditioned not only by what you say, but also by what you hear and what you see. The result is that policy proposals particularly at Brussels level, are not as ‘radical’ as they could be. The point is, it is extremely difficult to know what the red line should be, says Tocci.

At the same time, it can be difficult to voice concerns about EU policies if you are not part of the system.

– If you are a complete outsider, you can criticise all you want, but you don’t have any impact. If you want to have an impact, you would have to be part of that system, Tocci argues.

How can civil society influence the EU’s policies? Tocci highlights framing as the main contribution of NGOs to EU foreign policy making. NGOs come at questions in a different way than representatives of the EU institutions due to their knowledge of facts on the ground. Successful organisations combine this knowledge and trust of local stakeholders with an ability to frame the message to policy-makers. NGOs need to advocate their cause in a manner that adapts to where the policy debate is at the EU level. It is not enough to present a good argument for change. Arguments must be presented in a way that directly affects EU policies in order to have an effect.

– It is about understanding the policy-making process, and then understand where the potential crack in the wall is, and where you could try to widen a bit further, explains Tocci.

An important question is that of whose voices are being heard in the European institutions. Large NGOs which are present in Brussels often participate in dialogue meetings and public consultations with EU policy makers. Smaller civil society organisations, however, cannot always afford to run offices at headquarters level. According to Tocci, the large NGOs have a key role to play in reaching out to smaller partners.

– They have a responsibility to act as a hub and a connector to other organisations that might not be present in Brussels.

Yet, even if you are able to identify a crack in the wall, influencing EU foreign policy is not easy. EU institutions work slowly.

– We start to talk the talk and eventually we walk the walk. In the beginning it is just a sentence, but after time it changes. With the right framing and continuous efforts, civil society has successfully managed to change the EU’s policies over time, underlines Tocci.

With the right framing and continuous efforts, civil society has successfully managed to change the EU’s policies over time

Ways NGOs contribute to EU policy-making, according to Tocci

Tocci also reflected on the possibility of input from civil society becoming a simple ‘tick the box’ procedure. In other words, NGO participation runs the risk of becoming a fig leaf if their feedback does not lead to actual change. The EU wants input, but not too much criticism, Tocci warns.

– We have to be sceptical. We cannot allow for participation only to legitimise existing policies.

Tocci assures that there is a genuine interest in having civil society involvement both at the Brussels-level and in the field delegations. However, whether that genuine interest extends as far as the EU being prepared to actually change opinion and not only getting a legitimisation of what they would have otherwise done, that is ‘another question’. It might be difficult for civil society to identify whether they are in a tick-the-box position or actually able to push the EU’s policies. There is not always a clear-cut difference between the two.

Stepping into the machine

In order to facilitate civil society representatives’ ability to identify ‘the cracks’ and more successfully be able to influence the EU’s foreign policy, Tocci has a suggestion:

– I have become a big fan of greater contamination between civil society organisations and EU institutions. What I mean by that not simply having participating consultations, but actually stepping into the machine.

She is not suggesting that decision-makers and civil society representatives should switch sides, but rather open up to different perspectives. The added value is to acquire new intellectual capital from a different point of view, that you can bring with you back to your institution. In fact, the EEAS has already welcomed a foundation representative inside its walls. Hence, there is some signs of willingness to accommodate different perspectives within the EEAS, argues Tocci.