How do civil society organisations assess the work the European Union does outside its own borders? And how do these organisations themselves work with the EU? 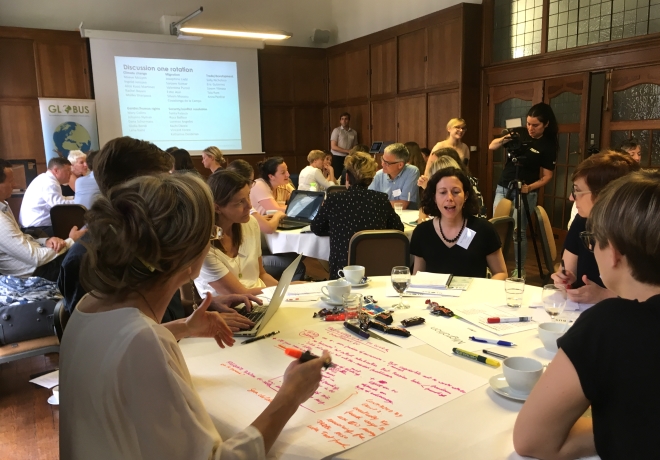 Researchers and NGO representatives discussed in small groups during the GLOBUS policy dialogue.

In order to discuss these questions, GLOBUS invited Brussels-based representatives of civil society to a dialogue meeting on 29 May 2018. Representatives from a broad range of non-governmental organisations (NGOs) attended the dialogue, including representatives from Amnesty International, Save the Children, World Wildlife Fund and the European Women’s Lobby.

The meeting had the format of a so-called world café, where researchers and NGO representatives discussed freely in small groups. Participants discussed challenges and proposed solutions to improve the EU’s external policies across five thematic areas: climate change, migration, security and conflict resolution, trade and development, and gender and human rights. Everyone was encouraged to air their concerns and experiences in a format less formal than your average hearing, conference or workshop.

While the group discussions were diverse, some general tendencies could be observed. Many NGOs described a tension in their relations with the EU. On the one hand, the EU’s financial support is important for the NGOs’ activities. Also, in order to be effective and obtain their objectives, cooperation with the EU can be important. On the other hand, the organisations are concerned with maintaining a certain distance from the Union's institutions – to be able to be critical when needed. NGOs working with migration worried that there seems to be some more strings attached to EU funding now than before the 2015 refugee crisis.

Many also aired frustration with existing procedures to include civil society viewpoints in EU policy-making. Public consultations, for instance, are often little more than a 'fig leaf' – a symbolic exercise.

Others added nuance to this perspective by emphasizing that organisations have more leverage when responding to concrete situations than when they try to influence the EU’s broader foreign policy strategies. Several participants pointed out that when they have concrete suggestions for improvement, it is easier to be heard.

In addition, a frequent advice was to concentrate on a carefully selected list of messages so that the most important concerns were not lost in a wall of demands. Sometimes, the EU institutions and the NGOs have a shared goal and can help each other to get there. Activists also maintained that it is possible to be critical and constructive at the same time.

NGOs have much to contribute – and something to learn

Dr. Nathalie Tocci, who is Director of the Italian Institute of International Affairs and  Special Adviser to EU High Representative Federica Mogherini, kicked off the dialogue in conversation with GLOBUS coordinator Helene Sjursen.

With experience both from academia and from the policy field, Tocci highlighted  NGOs’ importance as knowledge providers. Often they are better placed than the EU to understand what goes on in the field.

She also pointed to the importance of academic research both for the work of NGOs and of the EU. This is not just a matter of providing evidence and facts: Academia also provides conceptual tools that allow further critical thinking and enhances the understanding of issues at hand.

Law, justice, or both

Finally, Madeleine Rees, Secretary General of the Women's International League for Peace and Freedom (WILPF), concluded the session with a keynote lecture. She shared from her experience as a human rights lawyer and as head of office and gender expert for the United Nations in Bosnia.

In her lecture, she spoke of her work on transgender rights and gay people's right to serve in the British armed forces – and about her work on reforming and strengthening legal provisions so that the justice system is able to handle cases of sexualised violence. Sometimes, you can have law without justice, she said. Sometimes, there's justice without law. The objective must be, Rees concluded, that law can function as a force for justice.