The EU and global justice in a changing world order

Since its inception, the European Union has proclaimed an ambition to promote justice at the global level. But what precisely is the Union’s contribution? On 3 March 2020, GLOBUS researchers discussed key findings from their research with policy makers, CSO representatives, members of the European Parliament and representatives from the Commission and the EEAS. 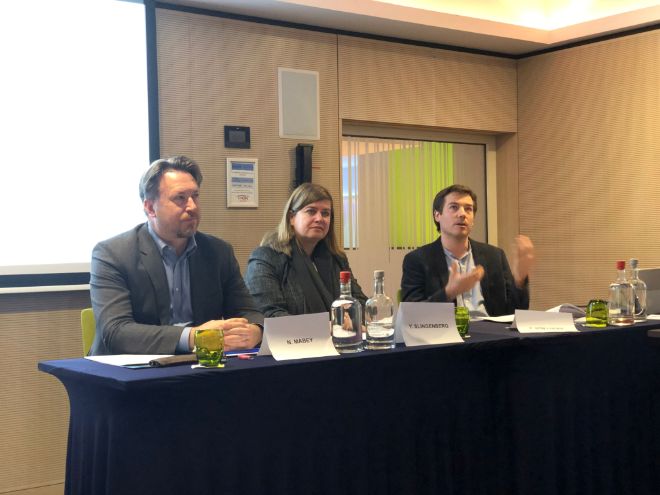 The overarching aim of the GLOBUS project has been to critically analyse the EU’s global role. Taking as is starting point, the observation that what is just is contested, research has focused both on developments in the overarching debate on multilateralism, and on the issue areas of climate change, migration, development and conflict resolution.

Throughout the project, GLOBUS researchers have engaged in dialogues with policy practitioners that work on issues of relevance to EU foreign policy and global justice, in order to ensure mutual learning. Discussions on March 3rd were organised in five main panels, each focusing on one of the main issues that have been addressed in the project. Each panel consisted of a presentation by a scholar from GLOBUS, which was followed by comments from a CSO representative as well as a representative from an EU institution.

In the first panel, GLOBUS Coordinator Helene Sjursen (ARENA Centre for European Studies), Ellis Mathews from the European Union External Action Service and Birgit van Hout from the UN Human Rights Office, discussed the implications of the present crisis of multilateralism for the European Union’s global role. Highlighting the link between multilateralism and global political justice, Sjursen outlined different ways in which the EU might respond to the present crisis. She further suggested that the crisis represents a particular challenge to the EU, as its foreign policy initiatives have been underpinned by a belief in the legitimacy of multilateralism and in the ability of this order to contribute to enhance global justice. Van Hout pointed to the tensions and ambiguities within multilateralism and asked:  ‘Who does the UN represent – people or states?’. She further called for the EU to maintain and strengthen its emphasis on the rights of people in its external policies also in the present context of contestation.

The crisis in multilateralism represents a particular challenge to the EU, as its foreign policy initiatives have been underpinned by a belief in the legitimacy of multilateralism and in the ability of this order to contribute to enhance global justice.

Climate change was the topic of the second panel, which consisted of GLOBUS researcher Franz von Lucke (University of Tübingen), the Director of DG Climate Action Yvon Slingenberg and Nick Mabey from the think tank E3G. The panellist discussed the EU’s changing approach to international climate negotiations and what is often referred to as principled pragmatism. In the 1980’s and until the mid-2000s, the EU mainly focused on top-down legally binding measures and leadership by example. After the failed summit in Copenhagen in 2009, it changed its negotiation strategy. According to von Lucke’s research, the EU has put more emphasis on ‘shared leadership’. This includes voluntary, non-binding and flexible measures, as well as listening to others and building bridges with the Global South. Key drivers for this new strategy were institutional transformations in the EU itself but also changed international circumstances such as the increasing influence of emerging economies in the climate negotiations.

The panellists further discussed how this change of approach might affect the level of ambition of the international climate regime and Nick Mabey highlighted the EU’s approach to China as particularly important. One major question here is how to balance between the urgency of climate change and the importance of respect for human rights.

Lack of credibility as a result of the migration crisis

In the third panel, GLOBUS researchers Sonia Lucarelli and Michela Ceccorulli (University of Bologna), MEP Roberta Metsola and Josephine Liebl from the NGO European Council on Refugees and Exiles discussed the EU’s approach to migration and global justice. During and after the migration crisis in 2015, concerns over internal backlashes led the EU to enhance the externalization of migration, establishing unequal partnerships with third countries, frequently through informal deals. Such deals, together with other measures, led to frequent violations of human rights, argued Michela Ceccorulli. Stranded asylum seekers along the Balkan routes and Greece and the conditions of refugees in Libya are just few examples.

By failing to uphold human rights obligations, the EU has lost credibility as a promoter of the law based multilateral system, argued Josephine Liebl. MEP Roberta Metsola argued that the cooperation with third states is a result of the EU relying on the work of other countries, and throwing money at the problem rather than fixing it. Based on their research, Sonia Lucarelli and Michela Ceccorulli argued that the EU has not sufficiently listened to the affected actors on the ground (such as vulnerable refugee groups or civil society), nor has it participated in the efforts to enhance the global multilateral management of migration through the Global Compacts. The lack of action has been a result of member states being divided and reluctant, concluded Lucarelli and Ceccorulli.

Equal partnerships in trade and development

In the third panel, GLOBUS researchers Pundy Pillay (Wits School of Governance) and Johanne Saltnes (ARENA Centre for European Studies) discussed the EU’s trade and development policies, with a particular focus on EU-Africa relations with MEP Barry Andrews and Gert Laporte from the think tank European Centre for Development Policy Management (ECDPM). The panellists discussed the EU’s renewed focus on creating an equal partnership with Africa, with an aim of moving away from the donor-recipient relationship. Although this is underlined in the EU’s policy documents on trade and development, the panellists pointed to some challenges that makes this aim particularly difficult. The EU has to balance between promoting local ownership and its conditionality policy. Conditioning aid and trade agreements on the respect for human rights and rule of law reduces predictability of funding and thereby contribute to dilute policy ownership, argued Johanne Saltnes.

Conditioning aid and trade agreements on the respect for human rights and rule of law reduces predictability of funding and thereby contribute to dilute policy ownership.

Another challenge to achieve an equal partnership follows from the ambition of seeking a bottom-up approach. A bottom up approach to trade and development would focus more on the people on the ground, such as civil society groups, rather than the state level. This aim is difficult to reconcile with the tradition of leaving high-level negotiations in the hands of mandated officials and diplomats from European and African countries. There is still a long way to go before the EU truly applies a multi-stakeholder logic to trade and development, argued Gert Laporte.

Local ownership was also an important topic in the event’s final panel on security and global justice, which consisted of GLOBUS researcher Ben Tonra (University College Dublin), Rene van Nes from the European Union External Action Service and Sonya Reines-Djivanides from the think tank European Peacebuilding Liaison Office. In the conflict and security domain, local ownership could entail working more closely with civil society actors in areas affected by conflict, as well as to focusing more on prevention, and not just conflict resolution. Nonetheless, there is evidence of a shift in gravity in the EU’s approach to security and conflict resolution, with a renewed focus on states’ rights, argued Ben Tonra. This is a result of the current unstable international order where multilateralism is in crisis.

In the conflict and security domain, local ownership could entail working more closely with civil society actors in areas affected by conflict, as well as to focusing more on prevention, and not just conflict resolution.

The panellists argued that EU can do more when it comes to conflict prevention and that we should not lose sight of the depth and potential of that capacity. While conflict management and conflict resolution captures headlines – and associated resources – it is important to remind ourselves of the overlapping and reinforcing strengths that the Union brings to conflict prevention and peacebuilding, underlined the panellists. The Union has well established strengths in mediation, human rights dialogues, strengthening civil society, and micro financing, and a host of associated programmes and policies. Within that context, listening to local actors and gaining local knowledge is of invaluable assistance. The challenge posed to the EU in the area of security and conflict resolution in the years to come is to practice genuine listening and to use the knowledge generated in more dynamic ways. Using this knowledge has tremendous potential, underlined Sonya Reines-Djivanides.

MEP Mairead McGuinness, 1st Vice-President of the European Parliament provided some closing remarks at the end of the event. Summing up the main topics discussed during the event, McGuinness underlined the importance of the EU working with national parliaments when implementing its foreign policy and engaging broadly with civil society in defining and pursuing shared values at home and abroad.