The GLOBUS art installation does not provide definite answers, but provokes a set of questions related both to everyday life and larger global justice challenges, says artist Marie Brett. 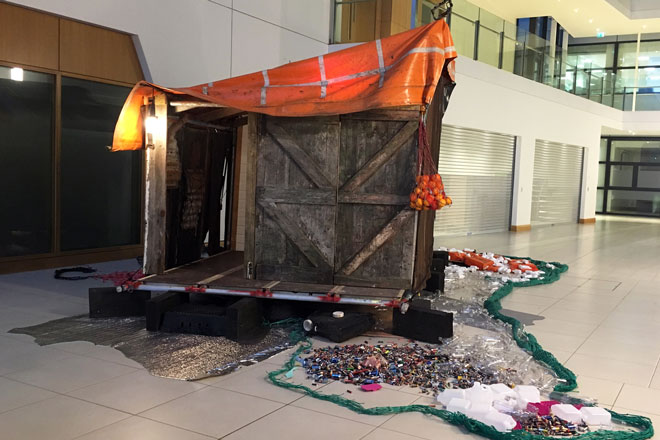 The artwork floats on a 'sea of debris' consisting of batteries, plastic bottles and life vests.

The art installation is inspired and informed by images submitted by students. In 2017, the GLOBUS project and Brett launched a campaign to gather images of global justice. The goal of the campaign was to get an idea of people’s visual interpretations of global justice to serve as a basis for the artwork.

‘The images were great in terms of moving the project beyond me and my own thinking’ says Marie Brett and adds that the images helped her understand the different GLOBUS themes better, as well as the wider sense of what is pertinent now in terms of global justice issues.

Marie Brett has also used resources from the GLOBUS website, such as publications and the Global Justice Blog, to get to know the different topics of the project – migration, climate change, trade and development, cooperation and conflict and gender justice. She says that research projects like GLOBUS can be difficult to fully understand if you do not have a prior academic background. Brett therefore hopes that the artwork can serve as a bridge between research and people that are already somewhat familiar with global justice issues through news and social media.

The art installation speaks to the entire agenda of our research, and hopefully will provoke thought and introspection on the part of those who see it.

The artwork communicates the project to people not by providing answers, but by provoking a set of questions related both to people’s everyday life and bigger global challenges, explains Brett.

The installation, which is built like a shed or shelter, refers to several pertinent issues of global justice, from migration and refugees, to gender violence, climate change and over-consumption and waste. Around the structure is what Brett refers to as a ‘sea of debris’, containing plastic bottles, batteries and other types of waste that has been gathered from the University College Dublin campus. A dishevelled pile of life vests can also be found on the floor outside installation.

I wanted the artwork to symbolise something that is unstable and in flux – I wanted it to have a feeling of not being totally permanent.

The structure or shelter itself is built with different salvage materials – from reclaimed timber to corrugated iron and used tarpaulin – all coming from different places.

‘I wanted the artwork to symbolise something that is unstable and in flux – I wanted it to have a feeling of not being totally permanent’, says Brett.

The shelter consists of two rooms, and a set of videos and images with discordant soundscapes. The back room has a blue light, a cold feeling and a muggy smell. Marie Brett wanted the installation to be interactive and inviting, but at the same time making people feel anxious about entering into it.

The people who see the artwork are faced with a set of challenges related to their own personal life, for example over-consumption and waste. At the same time, the artwork portrays bigger global problems, such as climate change and refugee flows as a result of war. In this way, people can relate the issues to their personal life, but also to global justice challenges – and perhaps also connect the two.

‘Students have expressed that they find the artwork confronting and relevant. People are both hungry to exchange views and to find out more’, says artist Brett, and adds that ‘people aren’t passive, they don’t just look another way, but want to talk about it’.

People are both hungry to exchange views and to find out more.

GLOBUS researcher Ben Tonra, Professor at University College Dublin, who has followed the process of creating the art installation closely, finds the artwork both provoking and informative:

The art installation is displayed in the O'Brien Centre for Science at University College Dublin.