Main navigation
Sub navigation
Publications > Research Papers > 2020 > Russia’s Conception of a Just International Order and Its Commitments with the Council of Europe: A Difficult Match

Russia’s Conception of a Just International Order and Its Commitments with the Council of Europe: A Difficult Match 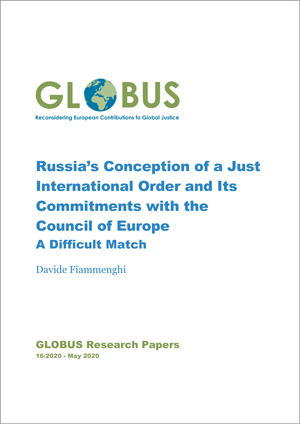 In 1996 Russia was admitted as a member of the Council of Europe in the hope that this would help the country to democratise. However, as datasets and country reports show, during the last decades Russia has become increasingly authoritarian. An authoritarian country which frequently clamps down on domestic opposition cannot be a member of a more liberal international organisation which advocates supranational rules, such as the protection of human rights, without serious tensions. In fact, since at least the early 2000s Russia has rejected its role of a ‘norm-taker’ which passively adopts European norms, and has engaged in a prolonged struggle with Council of Europe. Despite this conflict, Russia has achieved some limited progress in the protection of human rights (e.g., the de facto abolition of the death penalty) thanks to the socialising effect of institutions. Since the mid- to late 2000s, Russia’s refusal to adopt European norms and the ongoing conflict with the Council of Europe has prompted Russia to define its original normative stance, alternative to Europe’s. The product of this intellectual elaboration is the notion of sovereign democracy. The concept is composed of: (1) an attempt to stretch the concept of democracy in such a way as to apply it to an increasingly authoritarian country such as Russia; (2) the rejection of foreign criticism of Russia’s democratic and human-rights deficit; and (3) a conception of a just world order composed of sovereign democracies, based on non-interference, rather than on supranational rules. Such a conception of an illiberal world order has aggravated, rather than ameliorated, the conflict with the Council of Europe, an organisation deeply imbued with the view of a just world order as a body of supranational rules and values.

Tags: Contesting justice
E-mail this page
>
Research Papers > 2020 > Russia’s Conception of a Just International Order and Its Commitments with the Council of Europe: A Difficult Match
Fb Twcontact@globus.uio.no