Main navigation
Sub navigation
Publications > Research Papers > 2020 > Global Justice and Its Challenges: The Case of the EU’s Approach to Syria

Global Justice and Its Challenges: The Case of the EU’s Approach to Syria 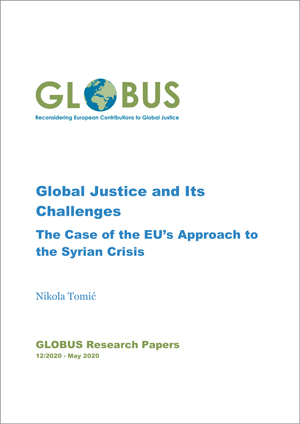 The EU views the civil war in Syria as ‘one of the worst humanitarian crises the world has faced since World War II’ (EEAS, 2019a), but has also confirmed its commitment that there is ‘no military solution to the war in Syria’ (Council, 2018). The EU’s response has been economically significant but diplomatically thin. While it has consistently addressed the humanitarian aftermath of the war, the EU’s ability to engage with the roots of complex, highly sensitive and politicised conflicts, which involve other influential international actors like the US, Turkey and Russia, remains limited. The EU’s response in Syria also challenges the ambitions of the Global Strategy (EEAS 2016), namely maintaining an integrated approach to crisis management and principled pragmatism in EU foreign policy, as it excludes any CSDP components of its crisis management comprehensive approach. This paper investigates how the EU’s comprehensive approach to crisis management and its recent commitment to ‘principled pragmatism’ function in practice when faced with the challenges presented by the Syrian civil war. The paper uses the GLOBUS justice framework to separate different competing sets of principles that shape the EU’s (self-)identity in the world and the interests of its member states. These different principles create policy dilemmas in the EU’s approach to Syria and the associated humanitarian crisis. Relying on official documents and interviews with policymakers in Brussels, this paper identifies key areas of political tension that shape the EU’s foreign policy towards Syria. The tensions lie between more principled and more pragmatic policy positions, as well as between conflicting principles that guide the EU’s policy on Syria. The paper analyses these tensions on a number of issues, including peace-making, reaching a political transition in Syria, the accountability of the regime, the reconstruction of Syria and the return of refugees.

Tags: Cooperation and conflict
E-mail this page
>
Research Papers > 2020 > Global Justice and Its Challenges: The Case of the EU’s Approach to Syria
Fb Twcontact@globus.uio.no