Principled Pragmatism in Climate Policy? The EU and Changing Practices of Climate Justice 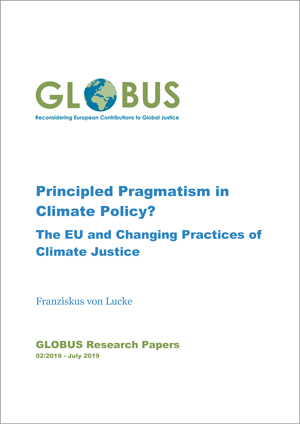 Climate change constitutes one of the most pressing problems of global justice. However, despite the recent success of the international negotiations embodied in the Paris Agreement, most scientists and activists agree that the adopted measures are not adequate or ‘just’ considering the magnitude of the problem. To make matters worse, the announced withdrawal of the US from the agreement threatens to further erode the path towards a sustainable and fair future. On the contrary, the European Union for most of the time has presented itself as a strong advocate for progressive climate action and has been called a climate vanguard or ‘green normative power’. The aim of this paper is to critically assess the EU’s role concerning climate change from a perspective of global political justice. Building on a tripartite theoretical conception of justice, consisting of ‘non-domination’, ‘impartiality’ and ‘mutual recognition’, it inquires whether the EU’s climate strategy and approach to the international negotiations indeed can be considered just and which conceptions of justice have been central. The paper finds that after the failed negotiations in Copenhagen in 2009, the EU has increasingly shifted from mainly relying on strategies linked to an impartial understanding of justice towards those that resemble mutual recognition and non-domination. While this shift was in parts necessary to move forward the international regime, it eventually could become detrimental concerning the quest for global climate justice.