Contested Ground: The Campaign to Enhance the Status of the European Union in the UN General Assembly 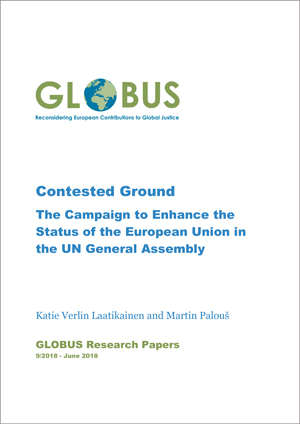 The implementation of the Lisbon Treaty in New York raised a number of questions about the inter-institutional relationship between the EU and the UN and about the role of international organizations within the UN system in general. There were several distinct phases of this process: (1) the informal discussions within the EU that started as early as in 2008; (2) the active phase of the implementation process, which was launched on December 1, 2009 when the Lisbon Treaty finally came into force, and which was crowned by the adoption of the Resolution of the General Assembly (GA) “Participation of the European Union in the works of the United Nations” on May 3, 2011; and (3) the post-adoption phase. The adoption of the EU resolution has not brought the definitive solution for the future modus operandi of the EU at the UN, but only opened a new series of sensitive questions and is challenging once again the EU consensus on this matter. The EU debate on how to implement the Lisbon Treaty in New York in the environment of multilateral diplomacy will continue even after the EU got its desired “enhanced status”—as the search for the “arrangements” and “practical modalities” for the external representation of the EU and its member states continues at the UN.

This paper consists of two parts. After a brief introduction into the changes brought by the Lisbon Treaty, the paper provides in Part II an extended narrative of the EU’s effort to gain enhanced observer status resulting in the adoption of the above-mentioned GA reso­lution. Part III is analytical. Several frameworks are used to contextualize the chal­len­ges of the EU to gain enhanced status: the nature of EU multilateral diplomacy; the sym­bolic nature of UN politics; issues of institutional isomorphism as other regional organi­zations highlight their own legitimate claims to relevance status based upon their internal integration processes; and the EU’s role in broader transformations of multilateralism.