Mutual Recognition in Global Negotiations: The Case of the 2015 Paris Climate Summit 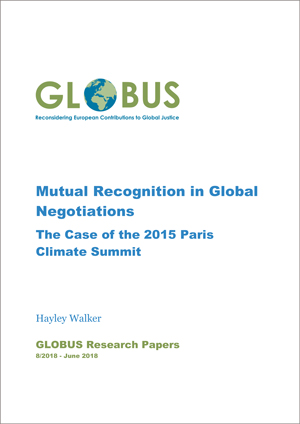 This working paper responds to calls for practical and implementable changes that can enhance global justice. It applies the GLOBUS conception of justice as mutual recognition to global negotiations, which have become prominent arenas for questions of distributive justice between the North and South across multiple issue areas including trade, climate change and environmental protection. Yet the focus of this paper is procedural justice. The case of the French Presidency of the 2015 UN negotiations that led to the adoption of the Paris Agreement on Climate Change is studied and put forward as a positive example of a just process. Furthermore, it is argued that procedural justice was instrumental in facilitating the reaching of agree-ment by increasing delegates’ willingness to agree. Previous accounts of procedural justice at the global level are largely concerned with questions of transparency and representativeness. By framing procedural justice around the concept of mutual recognition, it offers a more comprehensive understanding which is aligned with psychological accounts of procedural justice. In this way, it recognises the importance of individuals and socio-psychological considerations in international relations.