Between Rights and Fear: Evaluating the Migration-Terrorism Nexus in Europe

A workshop on migration and terrorism was held at the University of Bologna in June 2018.

Time: Between Rights and Fear: Evaluating the Migration-Terrorism Nexus in Europe June 4, 2018–June 6, 2018 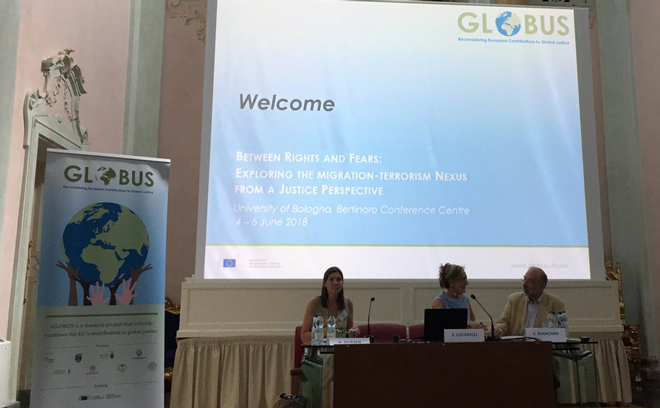 Over the past few years, the EU has experienced a significant surge in the inflow of migrants and refugees, one that has challenged the EU’s internal cohesion and has often been speciously used by populist and nationalist movements to fuel public concerns. At the same time, terrorist attacks have multiplied across Europe, some of them perpetrated by first or second generation immigrants claiming allegiance to Islamic fundamentalist groups. Despite all the efforts made by EU institutions to problematize the connection between migration and terrorism, the link is ever more immediately drawn within the public debate, with repercussions in the public perception of the two phenomena. The implications in terms of policy approaches, but also in the normative sphere, are manifold, and a deeper reflection on the precise terms of such implications is in order.
On a global level, ethical issues are raised not only by terrorist groups smuggling and trafficking migrants in view of a financial profit but also by the evidence that massive migration and terrorist radicalization may also be regarded as having some common roots in persistent global inequalities. Moreover, some of the measures undertaken to fight global terrorism have in fact generated more refugees. All these cases have important ethical implications and call for an attentive reflection on what may be considered a just response by the international/global community.

There is no easy solution to the clash among differing justice claims, but a scholarly reflection on these issues might help us contribute to a more educated public and political debate, at both a regional and global level, and to some extent to contain the securitization trends that seem to inform the reactions to these phenomena, despite their being at variance with most justice criteria.

16.30 – 18.30 Round Table – The Migration-Terrorism Alleged Nexus and Global Justice

EU Counter-Terrorism Policy: The threat of the ‘returning foreign fighter’ and the securitization
of migration, travel and border control.

Testing the limits of the EU’s comprehensive approach to crisis management: the case of Syrian migrants

Migration and Terrorism in Europe: The Impact of Schengen

The Refugee Crisis in the Mediterranean: Securitizing Practices, Terrorism and Foreign
Geopolitical Actors

The Migration to the Jihad: The Mirror of the Desire

The Two-way Causation of Migration and Terrorism: Asian Experience

Terrorists in America: Imported or ‘Made in America’?

Fear and Exclusion: the securitisation of Rohingya refugees in India

Giulio di Blasi, Member of the Cabinet of the High Representative of the Union for Foreign
Affairs and Security Policy

When the opposites attract. The relationship between foreign policy and the migration-terrorism nexus in the French far right and radical left discourse

11.00 – 13.00 Round Table – Maritime Operations in the Mediterranean: Security and Human Rights Considerations

Tags: Migration, Cooperation and conflict
E-mail this page
>
Conferences and workshops > Between Rights and Fear: Evaluating the Migration-Terrorism Nexus in Europe
Fb Twcontact@globus.uio.no