On 24 September, University College Dublin hosted a student debate and a screening of the film 'A Journey of Thousand Miles: Peacekeepers'. 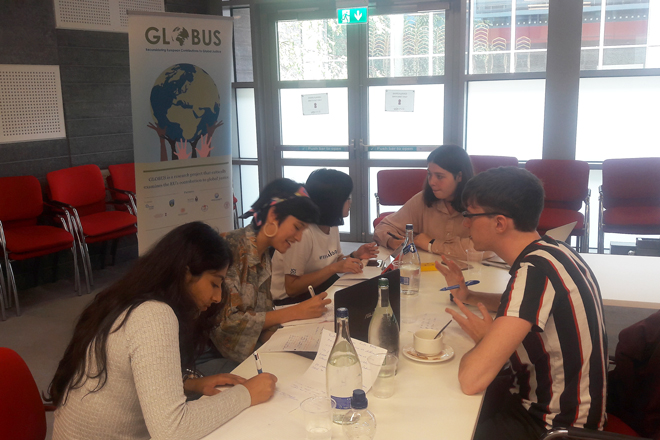 Ten students were selected to participate in a debate on global justice at the student day, hosted by University College Dublin.

The events organised were designed to engage students with the issue areas of global justice covered by the GLOBUS project (migration, gender, climate change, conflict resolution and trade) and the EU’s role therein. The day consisted of a student-led debate, followed by the screening of the film ‘A Journey of Thousand Miles: Peacekeepers’.

Ten students, selected based on an essay competition, participated in the debate, which provided them with a unique opportunity to explore various aspects of the EU’s global and ‘local’ (European) engagement. The students were split into two groups, representing two opposing positions on the question ‘EU and global justice - friend or foe’. The discussion covered a range of issues, for which the students prepared in advance, and ensured that critical thinking, engaging discussion and respectful considerations were the ultimate winners of the debate.

Following the debate, a screening of ‘A Journey of Thousand Miles: Peacekeepers’ engaged the students further with the topic of gender, which cuts across the main themes discussed earlier that day. The film depicts a group of Bangladeshi policewomen deployed to Haiti after the 2010 earthquake and mirrors their professional and personal struggles and achievements as women. The students noted several persisting issues and welcomed further commitment by GLOBUS to address these problems through its work.

This event is a part of the GLOBUS student days, a series of events that will take place at five of the GLOBUS partner universities throughout 2019 and 2020. The events will bring up questions about the EU's global role in the fields migration, climate change, trade and development, cooperation and conflict, and gender issues.

Upcoming events as well as event summaries will be posted on the event website in due time.