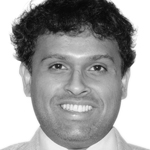 Sreeram Chaulia is Professor and Dean at the Jindal School of International Affairs, O.P. Jindal Global University. He is a leading opinion columnist for Indian newspapers - The Economic Times and The Asian Age - on world affairs and a commentator on international current issues on radio and television.

He is a contributing editor for People Who Influenced the World (Murray Books, 2005), and has authored International Organizations and Civilian Protection: Power, Ideas and Humanitarian Aid in Conflict Zones (I.B. Tauris, 2011) and Politics of the Global Economic Crisis: Regulation, Responsibility and Radicalism (Routledge, 2013). His new book, Modi Doctrine: The Foreign Policy of India’s Prime Minister is due out in 2016.

He tweets on global economic and political developments @sreeramchaulia