What strengths and weaknesses does the EU bring to international security operations, and how might policy be developed? 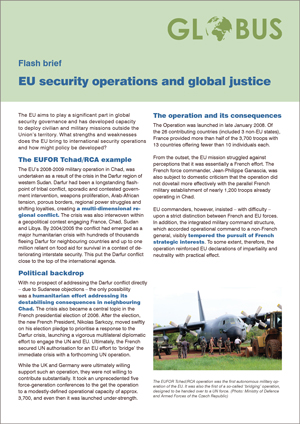 The EU aims to play a significant part in global
security governance and has developed capacity to deploy civilian and military missions outside the Union’s territory.

In this flash brief, GLOBUS researcher Ben Tonra looks at the EU’s 2008-2009 military operation in Chad. The EUFOR Tchad/RCA operation was undertaken as a result of the crisis in the Darfur region of western Sudan, and was the first autonomous military operation of the EU. The case illustrates what strengths and weaknesses the EU brings to security operations and how conflicting understandings of justice can (and cannot) be reconciled in the field.