Since its inception the European Union has proclaimed an ambition to promote justice at the global level. But what precisely is the EU’s contribution to global justice? And what could a just foreign policy look like? GLOBUS coordinator Helene Sjursen writes on the rationale behind the EU Horizon 2020-funded project Reconsidering European Contributions to Global Justice (GLOBUS). 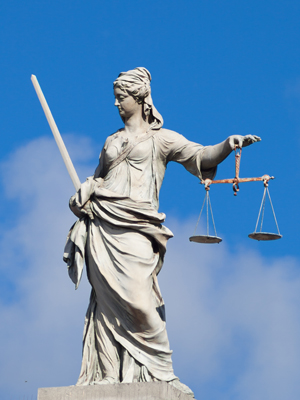 Justitia, the Roman goddess of justice, at the Dublin Castle (colourbox.com)

The EU has played a key role in climate negotiations and has developed a capacity for contributing to peace operations and crisis management. Yet, in other domains its contributions to justice are more contested. The EU members’ commitment to the stated values of the Union is tested as tens of thousands of migrants arrive at its borders, fleeing from war and oppression. Is a ‘fortress Europe’ compatible with the EU’s self-proclaimed aim of contributing to a more just global order?

Emerging powers challenge the perceived hegemony of Europe and its allies in global institutions. Regional trade agreements (TTIP, TPP) are in the making while global arrangements (WTO) are unravelling. Against this backdrop of change, uncertainty and contestation, it is particularly pertinent to reconsider the Union’s contribution to ensuring justice globally. The political challenges involved in devising policies to promote global justice echo the principled dilemmas discussed by theorists. Faced with intensified globalisation and economic integration, policy makers and theorists alike increasingly recognise that reflection on dilemmas of global justice is required. What is just cannot be settled theoretically, but a theory of justice can clarify the conditions under which justice claims beyond the state’s jurisdiction can be settled.

Is a ‘fortress Europe’ compatible with the EU’s self-proclaimed aim of contributing to a more just global order?

An adequate understanding of global justice must however also take into account realities on the ground. Power relations, tradition, divergent understandings of sovereignty and dire material circumstances can undermine the very conditions for justice claims to be made and heeded by affected parties. Moreover, the competing viewpoints of actors involved must be considered. What are legitimate claims of justice in the eyes of major global powers? On whose behalf do for instance the BRICS states voice claims for justice and what do non-Europeans consider to be adequate procedures for considering justice claims?

GLOBUS gathers scholars from different parts of the world to address both the principled and practical dilemmas involved in developing a foreign policy to improve conditions for global justice.