Women in Peacekeeping: Perspectives on Progress

There is a common assumption that the ‘right’ way for women to get involved in peacekeeping is through mixed units. However, all-female military units may serve to broaden the options for women, who, for a variety of reasons, may prefer to serve with women only, writes Dr Heidi Riley from University College Dublin. 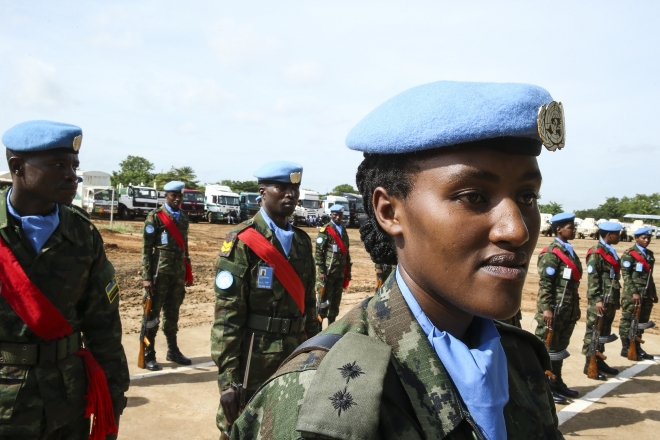 The Women, Peace and Security agenda: success or failure?

In 2017, the United Nations Department of Peacekeeping Operations (DPKO) set a target of recruiting 15% women as military observers and staff officers by the end of the year, and to reach a goal of 20% female police deployments by 2020. However figures currently remain far below this target, sitting at 3.8%.

This statistic has been widely criticized as a failure of the Women, Peace and Security (WPS) agenda, which has its foundation in the passing of UNSCR 1325 in 2000.  Amongst other commitments, UNSCR 1325 urged an increase in women’s participation in UN ‘field-based operations, including military observers’.

Yet beyond numbers, those that defend progress on this agenda highlight how women have increasingly taken on senior military roles in peacekeeping missions. In 2014, for example, Kristin Lund from Sweden, became the first female force commander, serving in Cyprus between 2014 and 2016.  In 2011, South African, Hester Paneras, in her deployment to Darfur became the first female police commissioner.  Although still limited, some militaries are proud to highlight the promotion of women to senior positions. For example, last year, Mary Carol from the Irish Defence Forces became the first woman to be deployed as force Operational Commander of the Irish unit in The Golan Heights.

A further indicator of progress on the WPS agenda is the rise in gender-sensitive policies and trainings that have been adopted by some national militaries, and also the introduction of gender focal points and gender advisors. Defending the long-term impact of these policies, a gender advisor for the Dutch military described how, during her first trip to Afghanistan in 2009, the role of gender advisor was largely unknown and considerable time was spent explaining the importance of her role and what it entailed. However, eight years later in 2017, when she was deployed as part of UNIFIL to Lebanon, she described how the role of a gender advisor was normalized as an unchallenged dimension of the mission[1]

Greater gender balance in the military allows for better decision making and makes the military a healthier reflection of the societies that they serve.

There is also increasing support in the upper echelons of some military institutions, of the importance of greater women’s inclusion.  For example, the Chief of Staff for the Irish Defence Forces is quoted as stating: ‘women’s participation is important, not just because of trying to be politically correct or in order to address issues such as sexual and gender-based violence, rather, greater gender balance in the military allows for better decision making and makes the military a healthier reflection of the societies that they serve’.[2]

However, a more commonly held perspective on the need for women peacekeepers takes a distinctly instrumental position. This position holds that women military personnel are more able to engage with local populations and are vital in performing gender sensitive tasks such as search operations, or dealing with conflict-related sexual violence.  Yet an over-focus on women’s association with ‘feminine’ military roles can result in portraying women’s military capabilities only in gendered terms, and overlook the reality that men and women are subject to the same training and occupy the same roles.

Although figures on women’s participation remain low across European militaries, some efforts have been made to promote women’s recruitment. For example, targeted recruitment campaigns have been adopted in the Irish context, and in Sweden and the Netherlands, gender equal conscription has been introduced.   Yet embedded societal gender norms that perceive women as weak and peaceful and therefore unsuitable for life in the military, remain a salient barrier to women’s recruitment.

A point of contestation: All-Female Units

At a recent seminar on the topic of women in peacekeeping, a panel convened military representatives from the Dutch and Irish militaries and a high-level UN field-staff member.[3] The discussion showed a general consensus across the panel around the benefits of female participation and agreement that, although progress has been made, it remains insufficient. However, one point of divergence between the perspectives of the two European militaries and that of the UN representative, a Bangladeshi national, was on the topic of all female units.

Although all-female units could be mistaken for being progressive, they are more likely to marginalize female military personnel by limiting member’s access into the wider force.

The European position held that all-female units cannot be seen as progressive as they work on predominantly female issues such as sexual violence, and therefore excuse men from dealing with such matters. Therefore only mixed and diverse teams represent progress. It was purported that, although all-female units could be mistaken for being progressive, they are more likely to marginalize female military personnel by limiting member’s access into the wider force.

Conversely, the UN representative praised the fact that from her home country of Bangladesh ‘all-female police contingents had been dispatched to Haiti, Congo and Liberia, along with all-female units from other countries such as Mongolia and India’. She explained that all-female units play crucial roles, both within peacekeeping missions and in raising the visibility of women in military roles. Moreover, she explained that the all-female units in Bangladesh have played an important role in opening doors for women in other areas of the armed forces. For example, Bangladesh has deployed its first two female fighter jet pilots as part of Bangladesh’s contribution to the Congo.

This is a similar position that is espoused by Lesley Pruitt in her book The Women in Blue Helmets: Gender, Policing, and the UN's First All-Female Peacekeeping Unit, in which she tells the story of the first all-female police unit deployed by India to the UN peacekeeping mission in Liberia in January 2007. She notes that although some women may be interested in taking part in male-majority units, others have good reasons to prefer working in women’s units.

All-female units in Bangladesh have played an important role in opening doors for women in other areas of the armed forces.

She found in her research that the all-female units provided an alternative to adaptation to male-majority units, towards an opportunity of shaping and pursuing, ‘structural and procedural change that gives serious attention to the needs and motivations of women’. It should also be remembered that, consistent with women in mixed units, women in all-female units go through the same training as their male counterparts and are equally capable. Pruitt also demonstrates that the all-female contingent raised the visibility of women in military roles, which led to greater number of women in Liberia joining the military.

The transformative potential of mixed units is certainly an important point, particularly where accompanied by gender training and the regulation of misogynistic behaviours. However, underlying the anti-all-female perspective is the assumption that all women want to be part of mixed units, when this actually may not be the case.

In many western feminist debates, the statement, ‘we have to take into account diversity among women’ or ‘women are not a homogenous group’ has become a commonly heard phrase. However, the actual meaning of this phrase is sometimes unclear. This raises questions around whether it actually refers to taking account of the culturally diverse needs and perspectives of various women within a rights framework, or can the meaning be conflated with a perspective that is associated more with an expectation of conformity within a western ideal?

A common assumption that that the ‘right’ way for women to get involved in peacekeeping is through male-majority units.

As Pruitt notes in her book, there is a common assumption that the ‘right’ way for women to get involved in peacekeeping is through male-majority units. However, this ‘right way’ could be understood as purely western ‘right way’, which may not chime in with the needs and desires of all women. A lack of recognising contexts that may espouse gender justice in a way that does not fit with a European narrative may be counterproductive and actually have the effect of denying opportunities to some women.

Instead, the promotion of all-female units in certain contexts may, in fact, strengthen the chances of achieving the target of 15% women’s participation. But more importantly than just meeting a quantitative target, these units can serve to raise the visibility of women in military roles or broaden the options for women, who, for a variety of reasons may prefer to serve in an all-female unit.  This, in turn, has the potential to play a long-term transformative role in shifting opinions around women in the military.

[2] Stated by Chief of Staff for the Irish Defence Forces, Vice Admiral Mark Mellet during the event, Women in the Armed Forces: A Nordic Perspective. 19th April 2018, IIEA, Dublin.

The Global Justice Blog is an academic commentary from the research project Reconsidering European Contributions to Global Justice (GLOBUS).
In this blog we aim to enhance debates and understandings of global justice, in particular the EU's contribution to justice, by presenting cutting-edge research and competing perspectives. There will be discussions on current issues, presentations of research findings from the GLOBUS project as well as personal reflections connected to GLOBUS events.
The opinions and arguments in the Global Justice Blog are exclusively those of the contributors.
Recent posts More ...
>
Global Justice Blog > Women in Peacekeeping: Perspectives on Progress
Fb Twcontact@globus.uio.no