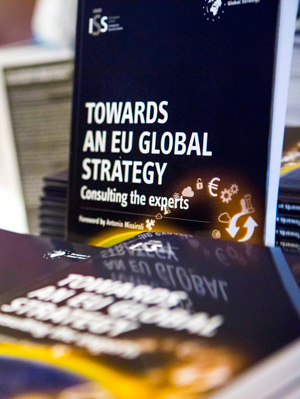 The weight and caliber of the EU Global Strategy should be appreciated given the difficulties of the times according to Mai'a Cross (photo: EUISS/Bernal Revert)

This post is the first in a series of commentaries on the EU Global Strategy on the Global Justice Blog. Next contributor: Ben Tonra, University College Dublin.

The launch of the EU Global Strategy was not simply the product of a standard exercise in crafting a Council document. In some ways, it is a synthesis and reminder of the vast range of areas in which the EU already has a well-developed foreign policy. In other ways, it reflects a renewed aim to strengthen and adapt to today’s challenging times.

I focus on the implications for diplomacy because much of the EU’s influence in the world stems from its status as a significant diplomatic actor. The EU’s diplomatic engagement with states, international institutions, and non-state actors is at the pinnacle of current international efforts at consensus and cooperation. The approximately 140 delegations across the globe, which are part of the European External Action Service (EEAS), are crucial in terms of executing and managing European foreign policy on a daily basis, and also play a key public diplomacy role. These embassies are increasingly the face of the EU on the international stage.

So, what is the significance of the Global Strategy? First, I argue that the timing and manner of its release just days after the June 2016 Brexit referendum turned the EU Global Strategy into an exercise in strategic diplomacy in its own right. Even though this was clearly not its originally envisioned purpose, the Global Strategy’s release served as a calculated diplomatic response to the negative outcome of the Brexit referendum. Rather than withdrawing or rethinking the EU Global Strategy’s content, foreign policy chief Federica Mogherini used its public announcement to reassure international partners of the EU’s continued engagement, in spite of the outcome of the Brexit vote.

A confident Europe stands more strongly by its values precisely when confronted with new challenges, not only when it is easy to do so.

In effect, Mogherini followed through with the strategy’s principles in the very way she reacted to Brexit. The strategy calls for the EU to be more assertive, confident, determined, and resilient, while openly confronting its challenges and fears. A confident Europe stands more strongly by its values precisely when confronted with new challenges, not only when it is easy to do so. Reducing uncertainty about what the EU stands for is chief among the messages that the EU Global Strategy conveys. The content of the strategy shows that there is much for the EU to do (more pressing than Brexit) that can only be tackled together, including Russian aggression, the return of foreign fighters, migrant flows, and economic recovery.

Second, with its emphasis on resilience, creativity, and target audiences, the strategy advances a noticeably more smart-power approach to diplomacy – combining hard and soft power – in practical terms. Even though the strategy does not mention ‘smart power’ explicitly, it puts a clear emphasis on its importance throughout the document.

On the soft power side, the strategy argues that the EU’s power of attraction stems from its ‘unparalleled networks’ of diplomats that are in large part responsible for EU’s prominence as a diplomatic actor. But the EU must also tackle both its ‘challenges and fears,’ according to the strategy, and find ways to communicate with outsiders strategically. This involves, among other things, focusing more on its own neighborhood as a priority, and engaging with those further away in a more targeted fashion.

The EU already has many sources of hard power.

On the hard power side, the strategy states that, ‘the idea that Europe is exclusively a “civilian power” does not do justice to an evolving reality.’ In particular, the EU already has many sources of hard power – both carrots and sticks – such as access to its markets, global economic and regulatory power, and its extensive sanctions regime against Russia, among other examples.

The EU’s narrative of 'principled pragmatism'

Finally, the strategy is also significant in terms of the kind of meta-narrative the EU seeks to project through its diplomatic engagement: a foreign policy that is based both on realistic assessment and idealistic aspiration (or together, principled pragmatism). This renewed narrative gets to the heart of the EU’s recent struggles in communicating its own identity, capabilities, and goals to the outside world. I define idealism is about the power of possibility that inspires actors to always reach for a better version of their reality. The point of being idealistic is precisely that the goal posts should continually shift to be somewhat out of reach, otherwise the overall vision for Europe loses its aspiration, and ceases to inspire people.

The specific blend of realistic assessment and idealistic aspiration in the EU Global Strategy is very much in line with a long-standing, underlying European approach to integration from its early inception in the 1940s and 50s. Certainly, the EU has been more idealistic at certain times than at others, such as during the early years of its founding, the passage of the 1986 Single European Act, creation of a Common Foreign and Security Policy in the 1992 Maastricht Treaty, and the launch of the Euro. But it has also had its more pessimistic periods, such as during the Euro-sclerosis of the 1970s and early 80s, the failure of the constitutional treaty, and of course, the Eurozone crisis.

Without some sense of idealism, the European project would never have gotten off the ground.

Today, as well, is a period in which much idealism is lost in Europe, with multiple challenges to tackle from migration flows to Russian aggression to the rise of far right parties across many EU member states. There is a temptation to simply give up on aspirations amidst heavy criticism, but it is important to remember that without some sense of idealism, the European project would never have gotten off the ground.

Thus, ultimately the strategy is very much part of a long line of aspirational and practical milestones that have been at the core of the European project from the beginning. The weight and caliber of the strategy should be appreciated given the difficulties of the times. While it is true that strategic documents like this are unlikely to draw attention from average EU citizens and the media, if diplomats interpret the strategy as a call for action, as they should, its contents will ultimately matter, and its impact will eventually be felt.

This blog post summarizes a recent article published by the author: The Global Strategy and EU Diplomacy, Contemporary Security Policy, 37(3), 2016.