Arrigo Pallotti (University of Bologna) has published an article in the Journal of Contemporary African Studies that analyses the democratisation process in Tanzania. 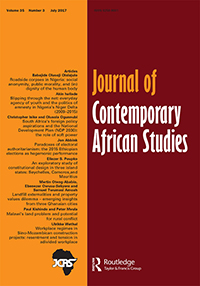 Tanzania’s Chama cha Mapinduzi (CCM), the oldest ruling party in Africa, has managed two complex transitions – from the socialist experiment of ujamaa to a market economy in the mid-1980s, and from a one-party state to multipartyism in the early 1990s – without putting at risk its control over the country’s state institutions. Drawing on the literature on the ‘limits to liberation’ in Southern Africa, this essay analyses the political factors that have allowed CCM to maintain a tight control on Tanzania’s state and society since independence, and highlights the limits of the current democratic transition in the country. The essay shows that while on the Mainland the contradictions of the government’s development policy have brought about a deepening crisis of expectations and opened the door to growing illiberal practices and populist impulses, the annulment of the 2015 elections in Zanzibar has made the future of Tanzania’s democratic transition even more uncertain.