The European Union’s Economic Partnership Agreements (EPAs) with countries in the African, Caribbean and Pa 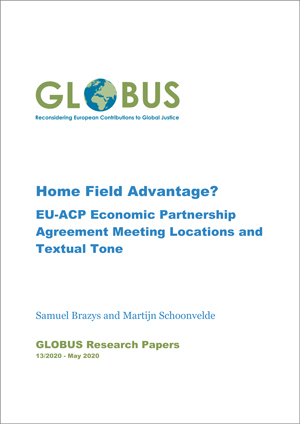 cific (ACP) group are touted as a new age of equitable partnership between European countries and former colonies. However, many critics argue that the EPAs simply substitute a different form of political and economic domination. In this paper, we consider if the siting of meetings has a substantive impact on the language of media describing the EPAs and/or communiques and statements that arise from those discussions. Using data culled from the Global Database of Events, Language and Tone (GDELT) via Google’s BigQuery, we use a difference-in-difference like approach to evaluate if the tone and polarity of media reports about the EPAs during periods of ‘home’ meetings in the ACP countries differs from media reports during ‘away’ meetings in the EU. We supplement these findings with analysis of joint statements released from a subset of EPA meetings. In general, we find that ACP countries’ tone and interests are better represented in media reports during ‘home’ meetings, but this may not translate to any meaningful difference in actual meeting outcomes. As such, meeting siting may be only a limited tool for reducing political domination.