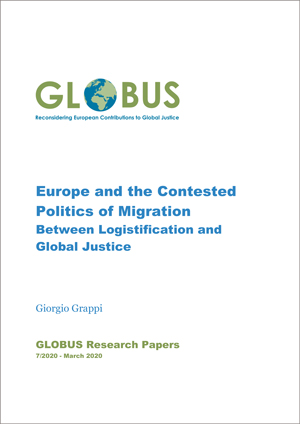 This paper analyses European approaches to migration. It does so with a focus on the struggles and claims advanced by migrants themselves and other subjects as an angle from which to discern the clash between a narrow, operational, understanding of what is just in the field of migration and different ways to instead understand justice as a political and dynamic principle. The paper discusses the conceptions of justice employed in the GLOBUS project – justice as non-domination, as impartiality and as mutual recognition – and argues for an expanded conception of justice as mutual recognition as a way to bring the discussion beyond both the Westphalian and cosmopolitan perspectives. It then discusses different forms of contestation of European migration policies, by examining different ways in which they are contested both in practice and in principle by different actors, including migrants and movements of solidarity. Lastly, the paper discusses the emerging approaches to migration within the EU through the concept of logistification, arguing that this leads to a form of ‘ethical minimalism’ that limits the reach of global justice as a political concept. The paper ends by arguing for the need to develop discussions about the global leading towards wider conceptions of justice where migration is considered in all its dimensions as a powerful transformative force, and not simply as an object of governance, and migrants themselves are considered as political subjects which constantly keep the quest for justice open beyond any reductionist approach.