Main navigation
Sub navigation
Publications > Research Papers > 2020 > Between Border Dispute and Ethnic Conflict: The EU as a Just Mediator in the Serbia-Kosovo Stalemate

Between Border Dispute and Ethnic Conflict: The EU as a Just Mediator in the Serbia-Kosovo Stalemate 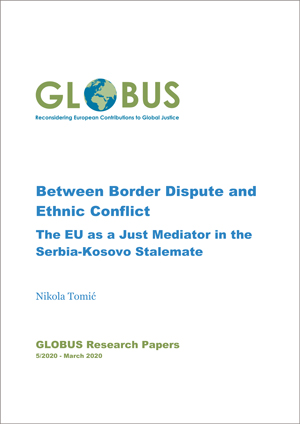 This paper analyses the contribution of the European Union (EU) to global justice and ethno-national conflict resolution between Kosovo and Serbia through its rule of law mission in Kosovo (EULEX), the Stabilisation and Association Process (SAP), and the EU-facilitated dialogue between Priština and Belgrade. The paper argues that an observed inability of the EU to resolve the conflict between Serbia and Kosovo stems from inconsistent and often contradictory normative drivers in the EU’s policy towards Serbia and Kosovo. The normative drivers are part of the EU’s commitment to achieving global justice through its foreign policy. To better understand and disaggregate these justice concerns, the paper utilises the GLOBUS global justice framework, which distinguishes between three conceptions of global justice: justice as non-domination, justice as impartiality and justice as mutual recognition. The paper identifies the ideal-situation policy choices in conflict management, which are in line with the respective conceptions of global justice. The paper then assesses the EU’s actions in Serbia and Kosovo and their effects on the ground against these ideal-type scenarios. The analysis reveals the key policy dilemmas the EU faces on the ground and argues that these dilemmas hinder their efforts in resolving the resolution of the frozen conflict between Serbia and Kosovo. The paper relies on both documentary data and interviews with stakeholders in Kosovo and Serbia that are affected by the EU’s actions, including civil society, businesses and governmental agencies.

Tags: Cooperation and conflict
E-mail this page
>
Research Papers > 2020 > Between Border Dispute and Ethnic Conflict: The EU as a Just Mediator in the Serbia-Kosovo Stalemate
Fb Twcontact@globus.uio.no