From Impartial Solutions to Mutual Recognition: Explaining Why the EU Changed Its Procedural Climate Justice Preferences 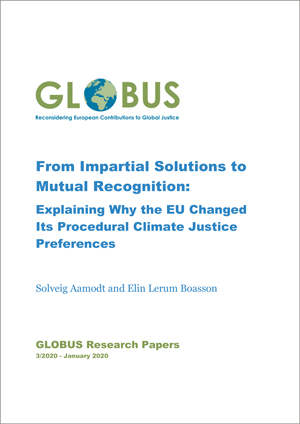 The EU fundamentally changed its positions from 2009 to 2015 with respect to the procedural aspects of global climate collaboration; from being a strong defender of an impartial international regime, founded on a view of global justice as impartiality, the EU started to promote a global structure founded on global justice as mutual recognition. Rather than continuing to oppose the positions of the BASIC countries (Brazil, China, India and South-Africa), the EU aligned to and largely adopted their positions. While geopolitical changes certainly played a role in this, it also resulted from a shift in which behaviours that were understood as appropriate within global climate politics, both within the global climate regime and in the EU. Based on reviews of the literature on global climate negotiations and international diplomacy, we identified two ideal type institutional climate logics: the scientific and the diplomatic institutional logics. The two logics produce different understandings of how to develop climate negotiation positions. A shift towards increased importance of the diplomatic logic contributes to explain the shift in EU positions. By analysing how and why the BASIC countries have influenced the changes in EU positions after the climate negotiations in Copenhagen in 2009, this paper contributes to bridging the gap between the literature on the BASIC countries and the literature on the EU in climate negotiations. Moreover, the study results in findings of general value to the literatures on the EU as an international actor and global climate politics.