Trade Liberalisation and Female Employment in Botswana and South Africa 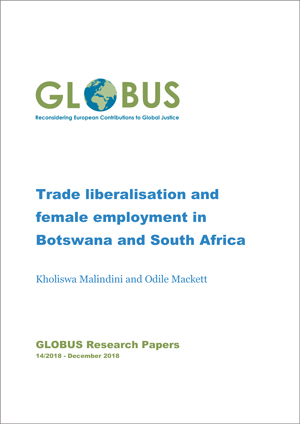 The literature on trade liberalisation has presented female labour force participation and employment as positive outcomes which can be realised through trade. Given that female employment depends on the growth and gender composition of the industries affected by trade, authors have found conflicting evidence on the topic. However, Çaǧatay (2005) has put forth hypotheses to explain possible scenarios under which feminisation of the labour force can take place, namely the buffer, segmentation and substitution hypotheses. The purpose of this research paper is to determine which of these hypotheses are congruent with changes in female labour force participation in Botswana and South Africa. Both are middle income countries with similar trade compositions which have undertaken trade liberalisation strategies over the last few decades and have experienced positive growth in female labour force participation. Micro and macroeconomic data on trade and employment were utilised for both countries and the findings suggest that the substitution hypothesis holds for both the agricultural and manufacturing sectors in Botswana. While the substitution hypothesis also holds in the South African agricultural sector, the buffer hypothesis holds in the manufacturing sector. Though the female employment growth in both these countries is a positive labour market indicator, developing countries such as these should strive towards attaining outcomes which resemble the segmentation hypothesis to ensure the sustainability of female employment growth. To achieve this, trade and industrial policies should identify female-dominated sectors, or at least sectors which are an important source of female employment, and gear development towards those. In addition, labour policies should be developed in conjunction with these trade and industrial policies to protect the rights of the workers in these industries.