The European Union as a Tolerant Actor 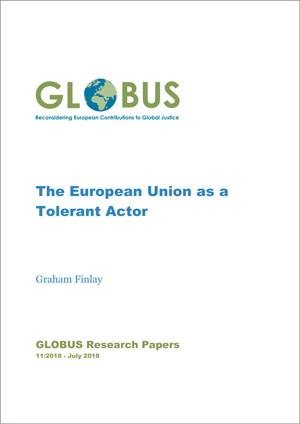 Although we associate toleration with the norms and institutions needed to navigate moral conflict within individual states, John Rawls has proposed an international norm of toleration as part of his theory of international justice. While Rawls’s approach is ultimately untenable, I argue that the European Union can benefit from thinking about its external action for global justice in terms of toleration. In part, this is because the standard approaches to toleration—classical, neutral and toleration as recognition—have strong, if uneven, affinities with the three approaches to global justice identified by GLOBUS. After considering the implications of all three theories of toleration and global justice for the EU’s external action, I argue that the EU is unable to engage in the strong recognition of cultures and practices that conflict with its values that is urged by both toleration and justice as recognition. The EU’s strong commitment to its values and the exigencies of its external action require that it not abandon these values in its foreign policy or the international systems that promote them. Nevertheless, the EU can engage in some practices of recognition that avoid the deficiencies of approaches—like ‘justice as non-domination’ and ‘justice as impartiality’—that do not include recognition as an essential part. This form of recognition focuses on including individuals, groups and states on the basis of their membership of a group entitled to recognition and inclusion, not as adherents or representatives of conflicting cultural and religious values and practices.