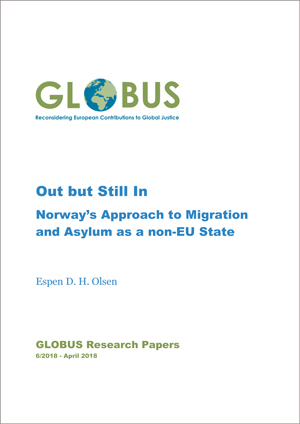 Norway is a somewhat exceptional country in Europe in political terms. It is one of the few European countries that are not members of the European Union (EU). Rather it has structured its connections with European institutions and organisations through membership in the European Economic Area (EEA) and a host of other agreements and accessions to EU policies. It is in this context that this paper addresses Norway’s migration policies from the vantage point of three conceptions of global justice. The time period for definitional analysis is recent developments, with a main focus on 2009 to 2016. A relatively recent historical phenomenon to Norway, migration is rapidly becoming an ever more important topic of political debate and policy-making. As any territorial state, Norway is part of the system of states, with effects on the logic of membership and gatekeeping on access to the territory and residence. This system has, however, become more ‘porous’ with supranational actors such as the EU, international legal obligations, and increased interconnectedness in cultural and economic terms transforming the nation-state. A firm conclusion on the adherence of Norway’s migration policy with the three conceptions of justice cannot be provided based on the descriptive definitional work of this paper. If anything, it has shown that there is arguably a tilt toward more adherences with justice as non-domination. Still, in terms of economic migration there is movement in the direction toward justice as impartiality in the equal treatment and non-discrimination principles for EU and EEA citizens. On the other hand, parts of asylum policy clearly stand in the way of realising the notion of reciprocity in the justice as impartiality or mutual recognition.

Tags: Migration By Espen D.H. Olsen
E-mail this page
include:property: resource not found: /english >
Research Papers > 2018 > Out but Still In: Norway's Approach to Migration and Asylum as a non-EU State
Fb Twcontact@globus.uio.no