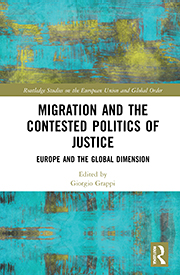 Migration and the Contested Politics of Justice is part of the GLOBUS book series Routledge Studies on the European Union and Global Order.

Considering justice and migration as globally contested fields, the book questions received wisdoms of European migration politics, including images of a migratory ‘crises’, the reconfiguration of the borders of justice, and the spurious pretensions of controlling and governing mobility. Gathering global scholars from migration studies, international relations and critical theory, as well as social activists, it advances an extended concept of contestation that goes beyond the simple clash of interests between national and international political actors. As such the book expands the discourse to a wider politics of justice and advances different angles and methodological perspectives from which to question purely normative conceptions of justice. Looking beyond the simple transformations in laws and regulations, the book updates the debate on migration adopting a global perspective.

This book is of key interest to scholars and students of migration studies, European studies, global justice, and labour, gender and EU studies.

1. Migration and the Contested Politics of Justice: An Introduction
Giorgio Grappi

PART 1: Controversies of Governance and Justice

3. Struggles and Repair Work in the Wake of 2015
Sonja Buckel and Judith Kopp

PART 2: Confronting the Border and the Governance of Migration

5. A Welcome for Eight Months: Europe, the Summer of Migration and Global Justice
Lena Karamanidou and Bernd Kasparek

7. The EU and the Aerial Geography of Deportation
William Walters

10. From Vulnerable Victims to Insurgent Caravaneros: The Genesis and Consolidation of a New Form of Migrant Self-Defence in America
Amarela Varela Huerta and Lisa McLean

11. The Global Ethical Implications of European Policies Towards Migrants and the Issue of Religion
Roberto Marinucci

12. Toward an Archive of Migrant Struggles: Critique and the Materiality of Justice
Maurice Stierl and Martina Tazzioli

Migration and the Contested Politics of Justice. Europe and the Global Dimension
Giorgio Grappi, editor
Routledge, 2021

E-mail this page
>
Books and articles > 2021 > Migration and the Contested Politics of Justice
Fb Twcontact@globus.uio.no