Former GLOBUS MA student Sigrid Jerpstad has been awarded the University of Oslo’s sustainability prize for her dissertation on the EU’s role in the UN negotiations on the global sustainability agenda. Having an office at ARENA, and being able to talk to researchers working on important international questions has been very rewarding, says Jerpstad 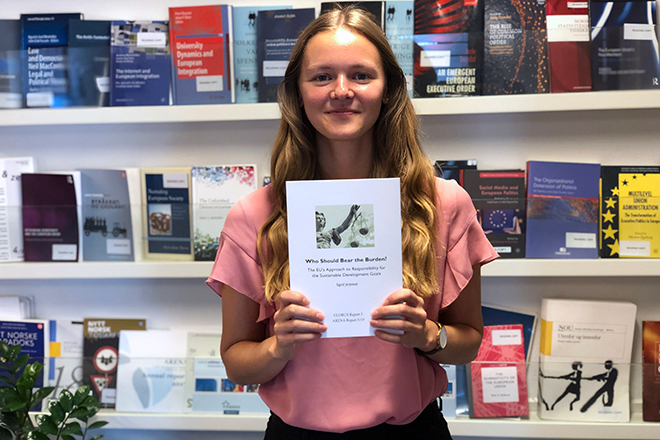 Sigrid Jerpstad received a MA thesis student grant from the GLOBUS project in 2018-19 and has published her dissertation in the project's report series.

Jerpstad is one of three winners of the University of Oslo's prize for best master's thesis on the sustainable development goals. The jury commends Jerpstad for her contribution to the understanding of the EU's role in the implementation of the UN's sustainable development goals, and further writes that 'these types of analyses of the EU from a political-sociological perspective have been limited in the field of EU studies'.

The prize is awarded annually to theses that contribute to knowledge on sustainable development. The prize includes 10.000 NOK and is awarded by the pro-rector at the University of Oslo, Gro Bjørnerud Mo, during a ceremony on 3 September 2019.

'These types of analyses of the EU from a political-sociological perspective have been limited in the field of EU studies'.

Who should bear the burden?

'One of my main findings was that the EU wanted emerging economies like China and India to take a larger share of responsibility, for example when it came to development financing and the sustainability goals. The EU argued that countries having high economic growth and emissions today, should take their share of the responsibility'.

Jerpstad explains that this view is in stark contrast to that of many emerging economies and developing countries.

'The EU wanted emerging economies like China and India to take a larger share of responsibility, for example when it came to development financing and the sustainability goals'. 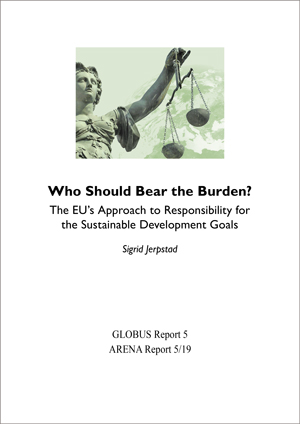 During her stay at ARENA, Jerpstad has been a part of the GLOBUS project, and her thesis findings speak to core concerns in this project. An important starting point for the project is that what is just is contested. Different actors have different views on what a just solution looks like. By analysing the EU's view on responsibility for sustainable development, Jerpstad also contributed to clarify what the EU perceives to be just solutions at the international level.

'The GLOBUS concepts helped me structure all the different views on what a just allocation of burdens would look like, both nationally and internationally. The framework helped me focus on three different ways of conceptualising justice and responsibility', says Jerpstad.

In addition to a stipend, Jerpstad was offered a supervisor and office space at ARENA. She got the chance to participate in GLOBUS events, and was able to publish her thesis as a GLOBUS and ARENA report.

'The GLOBUS concepts helped me structure all the different views on what a just allocation of burdens would look like, both nationally and internationally'.

Jerpstad highlights close cooperation with her supervisors as one of the greatest aspects of being affiliated with the GLOBUS project and ARENA. Jerpstad explains that she had frequent meetings with her supervisors Johanne Døhlie Saltnes (ARENA) and Cathrine Holst (Department of Sociology and Human Geography).

'I am very thankful for the good feedback I have gotten from my supervisors and from GLOBUS coordinator Helene Sjursen', says Jerpstad.

She also adds that sharing an office with other master's students working on similar topics has been very valuable.

'It was very useful to exchange views and to discuss the thesis with students from other institutes', says Jerpstad, who was a student at the Department of Sociology and Human Geography.

Jerpstad has participated in several events organised by GLOBUS. In March this year, she presented a paper based on her thesis at a GLOBUS workshop with leading scholars within the field of development.

'It was quite nerve wrecking as I have never done anything like it before, but it was also very rewarding', says Jerpstad.

She adds that she received useful feedback during the workshop that led to changes in her master's thesis.

Jerpstad, who now works at the Department for UN and humanitarian affairs at the Norwegian Ministry of Foreign Affairs, says that her knowledge about political processes in the EU and the UN is very useful in her job.

'I am currently taking part in the preparations for the next UN general assembly, so knowing how international negotiations work comes in handy'.