Gender has moved to the top of many governments’ and international organisations’ agendas. What role does gender play in diplomacy and foreign policy and how can gender equality and parity be achieved in these fields? Academics and policy practitioners discussed these questions at a GLOBUS roundtable in Dublin on 29 November 2018. 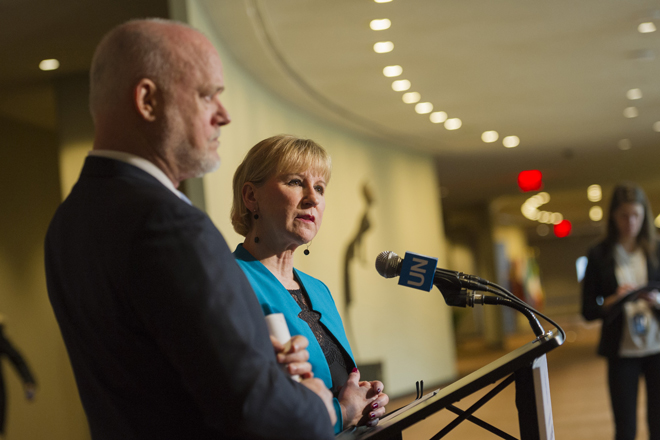 Margot Wallström, Minister of Foreign Affairs of Sweden, which is the first and only country to have a feminist foreign policy (Photo: UN Photo/Rick Bajornas, CC BY-NC-ND 2.0)

Historically, gender has not been a major concern in diplomacy. Although there is some evidence of change when it comes to women representation, only 15 per cent of the world’s ambassadors are female, explained Karin Aggestam, Professor of Political Science at Lund University during the roundtable discussions at University College Dublin.

The number becomes even smaller when we look at negotiators and chief mediators in peace negotiations. Similarly, Aggestam told the audience that gender has received little attention in the scholarly work on diplomacy and foreign policy. She therefore suggested that there is a need to rethink diplomacy in order to take stock of its intrinsic gender norms and dynamics.

There is a need to rethink diplomacy in order to take stock of its intrinsic gender norms and dynamics.

The gender of diplomacy

Jennifer Cassidy, Lecturer at University of Oxford and former Irish diplomat, argued that rather than talking about gender and diplomacy, we should address the gender of diplomacy. ‘Diplomacy is a gendered concept’, Cassidy argued. In her view, how we see diplomacy is influenced by the characteristics and roles we associate with gender.

In diplomatic history, women, by their very nature, have been perceived as ill equipped for diplomatic careers. The ideals promoted by diplomatic institutions are associated with the western male. A successful diplomat should be rational, strong, tall and polite.

It is not enough to just increase the number of female diplomats. It is necessary to reconstruct the perceived image of what a successful diplomat is and should be.

Therefore, according to Cassidy, in order to achieve gender equality in diplomacy, it is not enough to just increase the number of female diplomats. It is necessary to reconstruct the perceived image of what a successful diplomat is and should be.

Advantages of gender parity in diplomacy

Niall Burgess, Secretary General of the Department of Foreign Affairs and Trade of Ireland, took a different approach to the topic, arguing that it is time to move from whether there is a gender dimension in diplomacy, to how to address it.

Burgess underlined that gender plays a role in many of the challenges that the EU faces today - in fields like migration, climate change and conflict and security.

– Gender features on both sides of the equation: there is the impact of these issues on women, and there is the empowerment of women that can lead to a good outcome, said Burgess and added that

– Including more women in external relations is also important for the simple reason that the diplomatic service should look like the people it represents.

Being more representative could make the diplomatic service more effective, Burgess pointed out. He further added that the Irish diplomatic service for a long time has stressed values like diversity and equality at the international level, but that this has not been fully internalised in the foreign service itself.

Aggestam added that there is a correlation between the number of women in senior level positions in the foreign service and women’s political representation in national parliament.

The panellists agreed that gender justice cannot be achieved through the inclusion of women alone. Not all women will use their position to promote women’s rights. Burgess further argued that the lack of diversity in diplomacy is also linked to other factors than gender. For example, most diplomats come from the same socioeconomic background.

Arguments for gender inclusion are often based on assumptions that women are ‘inherently peaceful’.

Karin Aggestam criticised the tendency of essentialising gender in some foreign policy areas. For instance, some claim there are some universal innate gender differences between women and men. She called for more critical and detailed analyses of where and how women are included in foreign policy.

In her own research on peace negotiations, she has for example found that arguments for gender inclusion are often based on assumptions that women are ‘inherently peaceful’.

One way to enhance gender equality in the foreign service is to provide proper training for both women and men. However, Aggestam criticised the strong focus on training women to be ‘fit’ for diplomacy or peace mediations. She argued that there are many highly competent women out there who simply do not get the opportunity to contribute.

One way to enhance gender equality in the foreign service is to provide proper training for both women and men.

In her closing remarks, Aggestam quoted a female peacemaker:

– Who raises questions about training all these men that we see at the peace table? Women do not need any more training. What we need is training, maybe, in how to play golf and do whiskey drinking.