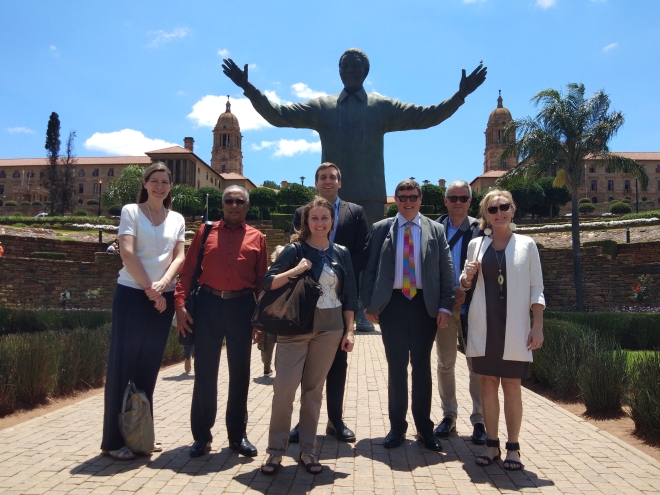 The GLOBUS team in front of Nelson Mandela's statue in Pretoria on 14 February.

During their visit, the heads of GLOBUS' research groups took part in a range of seminars and meetings with academics, policymakers, civil society representatives and other policy stakeholders.

Monday kicked off with a meeting at the Wits School of Governance. The GLOBUS team was presented with talks from the Global Change Institute, the African Centre for Migration and Society, and the South African Institute of International Affairs.

On Tuesday, the Congress of South African Trade Unions opened the morning session. They outlined clear global injustices caused by global power imbalances and limited European attempts to address them.

The session was followed by a meeting with the Department of International Relations at Wits. In the afternoon, the GLOBUS team met with the Industrial Development Corporation to discuss development finances, trade, and investment. A dialogue with Action Aid South Africa rounded off the afternoon session.

The team traveled to Pretoria on Wednesday for meetings with the Department of International Relations and Cooperation - the South African foreign ministry. The day continued at the Institute for Security Studies.

Thursday included meetings with the South African National Treasury and the Institute for Global Dialogue. The team also met with TIPS - the Trade and Industry Policy Secretariat, discussing how South Africa can transition to sustainable industrial development that is at the same time inclusive and socially just.