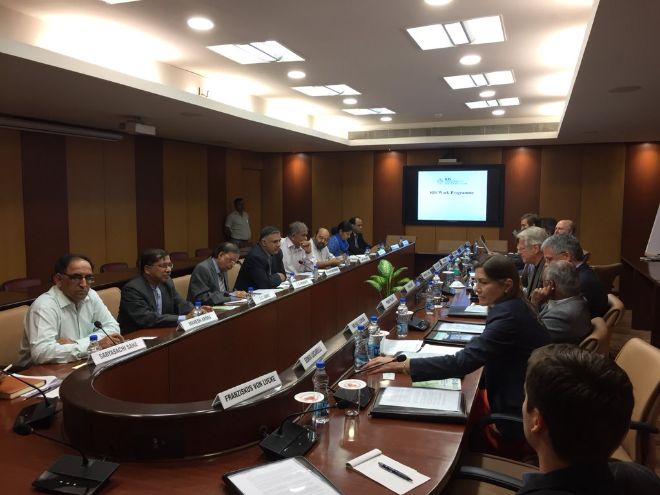 From November 5 to November 11 a group of ten GLOBUS researchers travelled to India for a study tour hosted by GLOBUS partner Jindal Global University (JGU).

Meetings with the Vice-Chancellor, faculty, and policymakers

The visit kicked off with a private breakfast with JGU founder and Vice-Chancellor Professor Raj Kumar who is also on the scientific advisory board of GLOBUS. Dr. Kumar is a prominent scholar of human rights, corruption and governance, and a leading expert on global education, among other specialities. Along with Professor Mohan Kumar, the former Indian Ambassador to France, and various JGU faculty members – in particular, Professors Michael Davis, Rohee Das Gupta, and Nicolas de Zamaroczy – Dr. Kumar facilitated a schedule of meetings with policymakers in Delhi for GLOBUS participants.

On the first day, participants joined a workshop with colleagues at JGU, the Indian Institute of Foreign Trade, and the Embassy of the European Union to India, among others.  Subsequently, the group spent the next few days meeting with representatives from the Indian Council of World Affairs, Research and Information System for Developing Countries, the Foreign Service Institute, the Energy and Resources Institute, and the National Human Rights Commission, as well prominent ministerial officials and civil society representatives.

As a result of this trip, researchers got a better understanding of how Indian policymakers see their country’s role in the world as well as its relationship to the EU.  Discussions centred on various aspects of India’s conception of world politics, especially how leaders, policymakers, and NGOs define global justice from an Indian perspective.

The trip contributed with valuable insights into all of the specific research projects of the GLOBUS consortium, including in areas of climate change, migration, gender, trade, and security. This was the first in a series of four international study trips planned for GLOBUS.