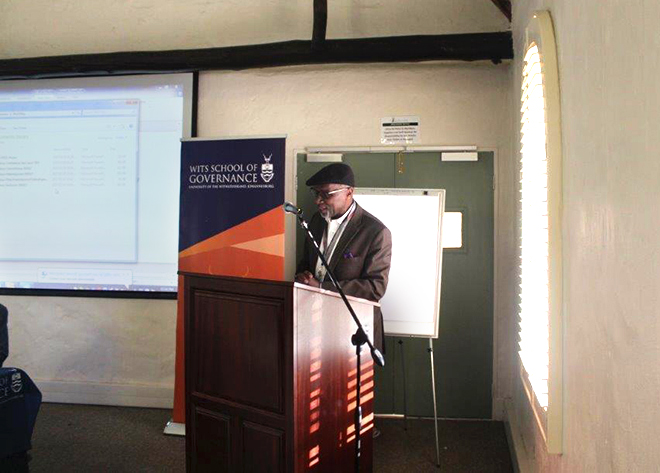 The workshop brought together scholars and practitioners from South Africa, Norway, Mozambique, India, Ireland, China, Tanzania, Zimbabwe, and Brazil for a three-day workshop at Wits University.

The papers and presentations covered a wide range of topics relating to three sub-themes of the research area of Trade, Development and Global Justice: EU trade relations with African, Caribbean and Pacific (ACP) countries, the trade-development nexus, and development policies comparing North-South and South-South cooperation.

The first research session was opened by William Gumede (Wits) who asked: are the Economic Partnership Agreements (EPAs) promoting or undermining Africa’s development? Moving from a general to a specific focus on the case of Mozambique, Cerina Banu Mussa (Ministry of Trade and Industry, Mozambique) presented an analysis of Mozambique’s trade relations with the EU and insights from the negotiations of the EU-SADC EPA.

William Gumede (Wits) kicked off day two of the workshop with a paper on South Africa's trade relationship with the EU, emphasising the need for more ‘value added’ products to be produced in South Africa. Ivor Sarakinsky (Wits) tackled the issue of renewable energy and local manufacturing in his paper. Nicolas de Zamaroczy (O.P. Jindal Global University, India) presented a paper where he compared East African Community and EU relations in the 1960s and 2000s.

The subsequent research panel was opened by Odile Mackett and Kholiswa Malindini (Wits) presenting a paper co-written with Pundy Pillay (Wits) on the link between trade and development in SADC. Krishna Vadlamannati (University College Dublin) continued by presenting the paper 'Does the EU’s “Aid for Trade” bring Justice to Trade and Development?' via Skype from Ireland.  Michelle Pressend (University of Cape Town) closed the session presenting her paper 'Changing Trade Relations – Towards climate justice, soil diversity, and food production in SADC'.

The final day opened with a session that gave the floor to researchers from different African countries. Blandina Kilama (REPOA,Tanzania), opened the session by among other discussing Tanzania and Vietnam’s successes and failures in exporting Cashew. Given Mutimyde (Zimbabwe) continued presenting the view from Zimbabwe. Closing the session Megan Govender (MAST Economics, Pretoria) presented a paper on social clauses as a condition for preferential trade access.

The final session was introduced by Johanne Døhlie Saltnes (ARENA) who presented a paper on donor coordination in the EU’s development policy. Pundy Pillay subsequently held a presentation on African perspectives on development aid. Finally, Renata Ribeiro (State University of Rio de Janeiro and University of South Africa), concluded the workshop presenting a paper entitled 'Perceptions of Brazilian Diplomats regarding the Agenda for International Development Cooperation'.