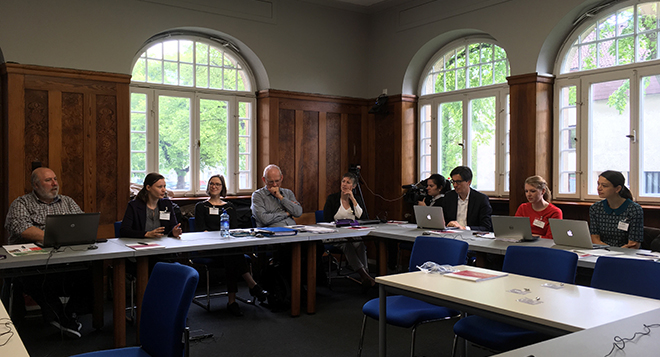 Workshop participants in Tübingen on 11 May.

What does climate change entail theoretically? There is a vital academic debate on the subject of climate justice. But how does the existing debate relate to GLOBUS’ three conceptions of global justice? And how does this, in turn, connect to EU policies?

Following project coordinator Helene Sjursen's (ARENA, Oslo) welcoming remarks and Thomas Diez' (University of Tubingen) introduction on why climate justice matters in the EU context, Franz von Lucke (University of Tübingen) presented the first paper of the workshop. Asking ‘O justice, where art thou’, he mapped out the main debates on climate justice and discussed how the GLOBUS conceptions of justice as non-dominance, impartiality, and mutual recognition relate to these debates.

Thomas Diez followed with his six dimensions of climate justice, expanding on the initial GLOBUS framework.

After lunch, Sadhbh O’Neill (University College Dublin) asked: Can carbon markets discharge moral duties? Solveig Aamodt (ARENA and CICERO, Oslo) analyzed the cooperation between the so-called BASIC countries in international climate negotiations, while Bettina Ahrens (University of Tübingen) presented a paper entitled 'The solidarisation of international society – the EU in the global climate change regime'. Katja Biedenkopf (University of Leuven) presented a paper on the role of the French presidency in mediating the Paris Agreement.