Workshop on Justice on the Move: Evaluating Migration Policies in the European Space

Prof. Sonia Lucarelli convened a workshop on the GLOBUS research area of Migration in Bertinoro on 1–2 July 2017. 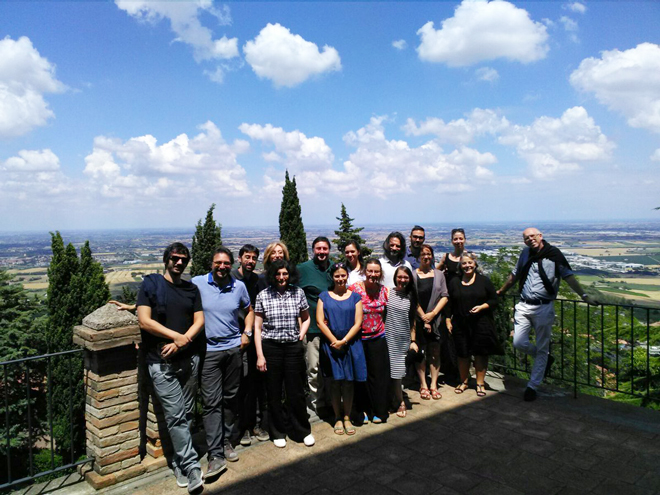 The workshop, which was led by GLOBUS WP3 Coordinator Sonia Lucarelli (University of Bologna), brought together GLOBUS researchers and stakeholders in the field to discuss the European Union and Member States’ migration and asylum policies from a justice perspective. The workshop aimed at investigating the normative implications of the European Union’s system of governance in the area of migration and asylum. Through an in-depth consideration of the main actors involved in the European migration system of governance, the workshop identified specific justice claims within this system.

Ethical issues and the political theory of migration

Sonia Lucarelli opened the first session with some introductory remarks on how justice can be evaluated in the area of migration She pointed specifically to the challenges associated with a justice analysis of the EU’s migration policy. Following this, Silvia Bottega (Jindal School of International Affairs) and Elisa Piras (University of Bologna) brought up questions regarding the ethics of migration policies in Europe. Bottega presented a paper on ethical issues of the migration crisis, while Piras highlighted the dilemmas that migration poses to mainstream liberal conceptions of justice.

The following sessions of the workshop focused on various European case studies. First, Michela Ceccorulli (University of Bologna) elaborated on the EU’s asylum policy reforms after the refugee crisis, with the clear message of a move towards more binding, supranational policies in the EU. Following this, Antonio Zotti (Catholic University Milan and University of Bologna) presented on the normative relevance of the UK’s pragmatic approach to migration and asylum issues.

In the second session, Lena Karamanidou (Glasgow Caledonian University) moved along to the case of Greece, one of the EU Member States most affected by the rise in refugee flows. Attila Melegh, Anna Vanscó, Dorottya Mendly, Vivien Vadasi and Márton Hunyadi (all Corvinus University of Budapest) presented a paper on the critical case of Hungary and its migration policies.

The workshop’s third session was kicked off by Espen Daniel Hagen Olsen (ARENA, University of Oslo) who presented a paper on Norway’s approach to migration and asylum as a non-EU state. As a relatively recent historical phenomenon to Norway, migration is rapidly becoming an ever more important topic of political debate and policy-making. Following this, Giorgio Grappi (University of Bologna) delved into France’s migration policies and their pitfalls. He argued that the situation we see in Ventimiglia and Paris are far from exceptional events, nor the result of a sudden ‘migration crisis’, but rather the product of the internal logic of France’s immigration and asylum laws and management.

Perspectives from the field: The Italian Refugee Council

Gino Barsella from The Italian Refugee Council ended the first day of the workshop with providing an important perspective from the field, giving on-site examples from the migration handling in Libya and Algeria. He especially highlighted the issue of human trafficking in the migration complex, and pointed out that migration cannot be stopped – it is a fact that needs to be managed as justly as possible. His snapshot on the EU’s performance in the Southern Mediterranean paved the way for a justice consideration weighting EU’s internal complexity and its search for external solutions.

The conference’s second day was kicked off by Antonio Zotti (Catholic University Milan and University of Bologna) who presented Germany’s multi-level migration system of governance. Marci Borracetti ended the conference’s fourth session by looking to the EU’s fight against human trafficking.

Overall, the contributions in the workshop has nurtured the debate and clearly underscored the different justice dilemmas existing in the EU Migration System of Governance.

Tags: Migration
E-mail this page
>
Conferences and workshops > Workshop on Justice on the Move: Evaluating Migration Policies in the European Space
Fb Twcontact@globus.uio.no