ARENA hosted a debate on the EU and partnerships for sustainable development on 24 October 2019. 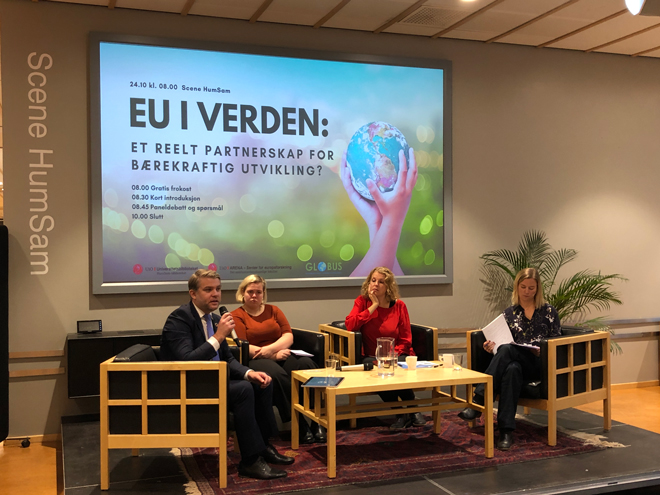 Some issues, such as climate change and poverty, reach beyond state borders and require international cooperation. While the UN's Millennium Development Goals focused on aid to poor countries, the Sustainable Development Goals are universal and require efforts from both developed and developing countries. As the world's largest provider of aid, the EU plays an important role in the global effort to implement the Sustainable Development Goals, and to ensure reduction of poverty and inequality by 2030. In its 2019 Global Strategy, the EU has signaled a wish to move away from a donor-recipient relationship to developing countries, and towards a true and equal partnership for development. This partnership should be based on common interests, values, equality and trust.

But is it possible to create true, fair and equal partnerships for sustainable development in a world where international institutions to a large degree favor Western actors? Can such partnerships exist when resources and power are not distributed equally? Further, how to ensure that these partnerships will lead to a reduction in global warming and poverty?

The event will be held in Norwegian

In the opening introduction, Johanne Døhlie Saltnes, highlighted a number of ambiguities connected to the EU’s proclaimed partnership with Africa. While the EU holds that it has a fruitful partnership with a broad selection of partners in the Global South, in practice beneficiary governments are prioritized in key processes such as human rights dialogue. Saltnes also explained how the EU has taken a prominent role in advancing private-public partnerships for financing of sustainable development initiatives. While enhancing the sustainable footprint of private actors is important, Saltnes highlighted that the task of control and coordination that international organizations have carried for donors is lacking for the private sector.

The panelists provided different perspectives on how partnerships for sustainable development could be established, and discussed whether such partnerships is the most effective way to achieve the sustainable development goals. Elin Lerum Boasson (University of Oslo and CICERO), who has researched the EU and the BASIC countries’ role in climate negotiations, argued that the EU essentially failed to get partners on board for their position at the Copenhagen climate summit in 2009. While the EU sought to get binding international regulations to reduce emissions, they had to adjust their approach. The 2015 Paris agreement had a bottom up approach, where states set their own targets for reduction of emissions. According to Boasson, even though the Paris Agreement was presented as a success by the EU, it was more so a result of the EU changing its strategy and adapting its goals to those of its partners.

Marte Mørk from SAIH, a civil society organisation working on education and development, spoke about the importance of partnerships with marginalised groups. However, she noted that it can be difficult to create equal partnerships when there is a donor-recipient relationship. One option, she highlighted, is to focus on capacity-building within partner organisations and provide support to building networks among local organisations who have a more equal standing. According to Mørk, a focus on capacity and network building can contribute to foster coordinated and strong civil society movements, which in turn can provide donors with context sensitive information and strengthen organisations capacity to act as critical interlocutors of donors’ policies.

Kim Gabrielli from UN Global Compact Network Norway, a corporate sustainability initiative set up by the UN, reflected on recent changes in the business sector and its role in contributing to sustainable development. In his view, the sustainable development goals are increasingly seen as a business opportunity that can leverage a positive effect on economic development and poverty reduction. Meanwhile, he also noted that it can often be difficult to set up trade partnerships with actors in countries with authoritative traits. Gabrielli argued that dialogue, not international regulations, is the most fruitful way to approach such challenges. According to Gabrielli, universal standards and regulations lack the necessary enforcement mechanisms to influence both private and public actors to change their policies.

The event is organised by ARENA Centre for European Studies in cooperation with the Humanities and Social Sciences Library (HumSam Biblioteket) at the University of Oslo.

This event is a part of the GLOBUS student days, a series of events that will take place at five of the GLOBUS partner universities throughout 2019 and 2020. The events will bring up questions about the EU's global role in the fields migration, climate change, trade and development, cooperation and conflict, and gender issues.

Upcoming events as well as event summaries will be posted on the event website in due time.