At an ARENA Tuesday Seminar on 13 March 2018, Raffaele Marchetti presented his paper 'What is a democratic foreign policy? Procedures, goals and actions for states and the EU'. 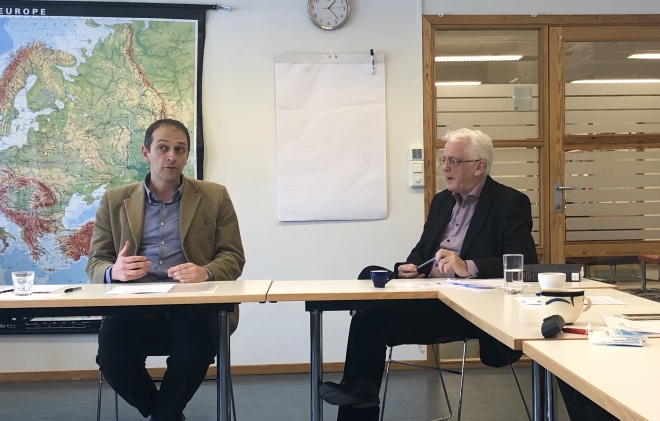 Marchetti presenting his paper on 13 March 2018.

In the paper, Marchetti argues that the debate about democracy globally needs to pay closer attention to states' foreign policy. A state is not fully democratic unless its foreign policy is democratic.

The foreign policy dimension of democratic theory is an un-charted territory. The debate about democracy at the international level has invariably focussed on how to democratise international institutions. From cosmopolitan democracy, to transnational stakeholder democracy, to global all-inclusive democracy, a number of different proposals have been formulated in recent years. What has been completely left out is the issue of foreign policy, how states and international organizations should behave in their external relations vis-a-vis one another. We need a formulation of this dimension in order to complete the wider project of democracy beyond borders.

In the past, attempts to define criteria of democratic legitimacy in foreign policy has been extremely rare. In contemporary debates, the extent to which a foreign policy qualifies as democratic has not received any scrutiny. This lack of analysis is surprising and worrying, since the issue is of paramount in today’s world. The ultimate objective of the paper is to revise the notion of democracy currency in operation in order to expand its scope: the principle remains the same, but the field of application needs to be broaden as well as its normative implications. This is an attempt to open up a debate linking a widespread public need for a better foreign policy and a lack of academic reflection.

This paper is structured in the following way. First, I will map the terrain of those very few studies on the topic that have been carried out so far: I will analyse these studied with the intention to understand what motivated them and what are their results and their limits. Second, taking into account the previous studies and their shortcomings, I will elaborate a new argument about the criteria that a foreign policy paradigm needs to have in order to qualify as democratic. I will analyse each component of the foreign policy package: procedures, goals, and the actions. I will then discuss the tension between ideal and non-ideal circumstances, and will provide a typology of democratic regimes according to degrees of democratic foreign policy. The argument will be applied both to the case of States and the EU. I will conclude with a number of reflections on the normative aspirations of democratic theory and its political implications.