GLOBUS section at the 2017 EISA Conference

GLOBUS researchers chaired the section The European Union: Promoting or obstructing global justice at the EISA conference on International Relations in Barcelona, September 2017. 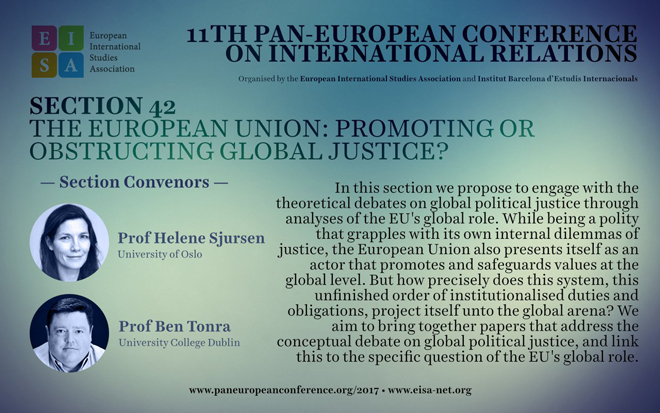 11th Pan-European Conference on International Relations
The Politics of International Studies in an Age of Crises
13-16 September 2017, Barcelona, Spain

Global justice is most often thought of as a matter of what would be a fair distribution of goods and resources – hence the quest for global distributive justice. But also a hegemon can distribute goods in a just manner: the focus on distribution of goods in theories of justice blends out the first question of justice, namely that of political power. In this section we propose to engage with the theoretical debates on global political justice through analyses of the EU's global role. While being a polity that grapples with its own internal dilemmas of justice, the European Union also presents itself as an actor that promotes and safeguards values at the global level. But how precisely does this system, this unfinished order of institutionalised duties and obligations, project itself unto the global arena? In the context of intensified globalisation and economic integration, there is increasing recognition that the settlement of justice claims cannot be confined to domestic political settings. Yet, the concept of justice is contested. To the extent that the EU contributes to enhance global justice, what conception of justice does it rely upon and to what extent is this conception echoed by state and non-state actors outside of Europe?

This section brought together papers that addressed the conceptual debate on global political justice, and linked this to the specific question of the EU's global role. Thus, the section aimed to cross disciplinary boundaries, in particular between international political theory, international relations and EU studies. There was considerable interest for the call for papers for this section, which will consisted of several panels with participation from scholars within the GLOBUS project as well as from the wider scholarly community.

The following GLOBUS-researchers participated in the section:

FC42: Justice and the 'Refugee Crisis': The EU, Migration and its Contestants (GLOBUS V)