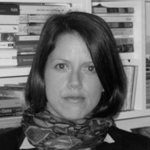 Melanie Hoewer joined SPIRE in 2012. Before that she was teaching in the UCD School of Social Justice and in the Irish School of Ecumenics and she worked in a EU-Daphne funded project on Gender Violence and LGBT rights and on issues of conflict transformation, human rights and social justice for Amnesty International (Irish Section), the Latin American Solidarity Centre and the Friedrich Ebert Foundation (Mexico and Colombia). She is academic adviser to the Consultative Group of the Department of Foreign Affairs on the UNSCR 1325 Action Plan on women, peace and security in Ireland.

Melanie's primary areas of research are comparative ethno-national identity, conflict and settlement processes, gender equality and women's rights, Latin American politics and Northern Ireland. Her UCD PhD thesis examined gender and identity in peace and conflict processes in Northern Ireland and Chiapas, Mexico. She has since written on intersecting boundary processes in the ethno-national conflict and settlement processes, gender identity and women's rights in Iran and Ireland, approaches to Gender Based Violence in Ireland and the status of women in Ireland.